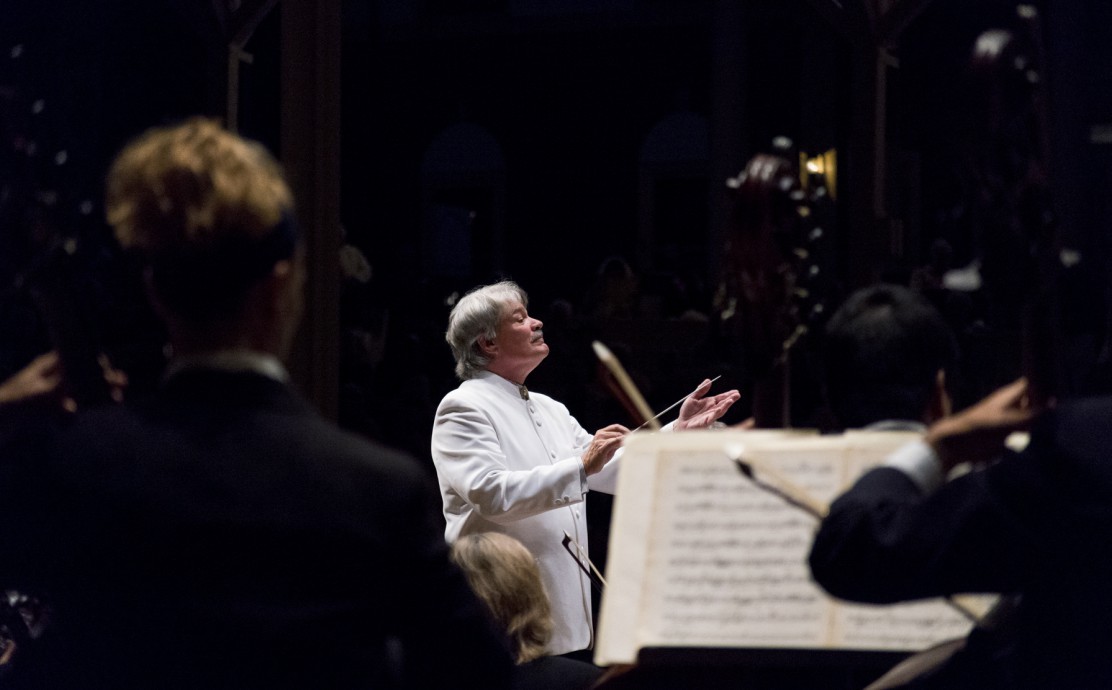 Conductor Bruce Hangen made his Chautauqua Symphony Orchestra debut Thursday evening in the Amphitheater, leading the first of two season appearances. He selected an ideal mix: a classic that never wears out its welcome, a Beethoven symphony not played frequently enough and a work unfamiliar to most in the audience.

The program opened with Maurice Ravel’s suite from his magnificent gem “Ma Mere L’Oye” (“Mother Goose”). Originally composed in a four-hand piano version for two precocious children not yet 10, the piece became  even more meaningful when scored by the greatest of all orchestrators.

Hangen chose mostly slower tempi than usual in this piece, and led its five sections in an almost chamber-like delicacy. This approach satisfied by both reveling in Ravel’s poignant fairy tale atmosphere, and through the conductor’s well-gauged intention to illuminate the glorious wind solos, which abound throughout the piece.

In the opening “Pavane of the Sleeping Beauty,” oboe and flute solos sparkled up to the majestic conclusion and, in “Tom Thumb,” the fluidity of the oboe, bassoon and fluttering flute passages led to the call of the birds, who ate Tom’s return trail of crumbs. “Laideronnette, Empress of the Pagodas,” with another radiant flute solo, was all watercolors instead of orchestral might, and the “Conversations of Beauty and the Beast,” with the contrabassoon’s lurking Beast and its taming into a prince, was delicious. The first few measures of the final “The Enchanted Garden” are as magical as music gets, and Hangen used great restraint until final horn calls and a fortissimo finale.

This writer recalls a conductor who beat time so literally and mechanically that he completely drained the charm and beauty from this evocative masterwork. Fortunately, Hangen’s flexible interpretation — with watercolors rather than bright oils — brought these fantasy characters to life.

Hangen, one of the eight contenders for the CSO’s music directorship, led with a clear beat, occasionally raising the baton in the air for a back-row cue; he uses an expressive left hand and sometimes stopped in a repetitive figure when the musicians didn’t need the baton. 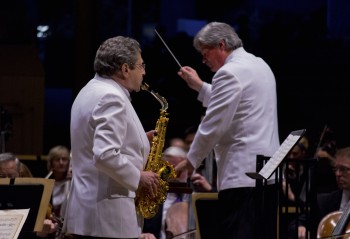 When saxophonist Ken Radnofsky asked Amram for a concerto back in 1980, Amram was inspired to relate the work to his late friend Lord Buckley, with the alto saxophone seeming best at expressing music from diverse cultures. Amram had played piano for Buckley, the glib artist with pseudo-British persona whose fractured language celebrating the ironies in society, complete with pith helmet, made him a hip magnet for the upper echelon of society. Bob Dylan called him a “hipster bebop preacher,” and a friend of this writer, who also played for Buckley, remembers him often being driven around Los Angeles, with ascot, bowler hat and cane, in a duchess’ Rolls-Royce. YouTube sports his classic “The Naz,” an examination of the Nazarene that requires an open mind and funnybone.

Hangen brought composer David Amram on stage before a performance of his “Ode to Lord Buckley, Concerto for Alto Saxophone,” calling him “an incredible legend.”

Amram said, “It took me 83 years to get to Chautauqua, but it’s a joy to be here. Your orchestra members are the best role-makers, they are a composer’s dream.”

The concerto begins with drums and an insistent melody, a playful mood with trumpet and xylophone, before the saxophone entry with a jaunty theme. Radnofsky is asked to play throughout the whole range of his alto between orchestral outbursts. Sometimes the winds seem to be playing music unrelated to the soloist, but in some mystic way the blend made sense. There’s an especially beautiful section where the high strings are playing harmonics, announcing another entry and Radnofsky’s cadenza of quotations from the theme.

The ballad movement began with an elegiac section and a liquid solo by the alto, leading to his eventual outpouring of jazz syncopations. The orchestra plays some wonderful riffs too, slightly unconnected to the alto though harmonically grounded. “Taxim” leads off with a big percussion outburst, followed by a Sephardic tune from Radnofsky; playing in his upper range with all kinds of embellished notes, he almost broke into a wail. Near the end, one of many cadenzas features a more traditional melody, but soon there’s a huge orchestral finish.

Radnofsky is a true master of the instrument, and after the performance he said he’s played the work about 30 times since it was composed in 1981. (Earlier this year, he commissioned Amram to compose another work, “Greenwich Village Portraits,” homages to Amram’s friends Arthur Miller, Odetta and Frank McCourt. )

Considering that Hangen and Radnofsky have recorded the piece (plus two other Amram works), and that the composer was in attendance and was very pleased with the performance, his reaction counts as definitive. The piece was fascinating, and deserves many more hearings on the CD to fully absorb Amram’s exuberant creativity.

Beethoven’s Fourth Symphony, which uses the smallest orchestra of the nine, begins with a somber undercurrent, a holding back until unleashing thunderbolts. After the theme and many variants comes a graceful central melody. The CSO constantly accentuated the rhythmic vitality in the work, without which it would pale; Hangen was successful at handling transitions, when fragments of the theme are thrown around the orchestra. Beethoven typically begins his ending, then decides to stop and provide another.

The adagio movement, with its powerful central climax and throbbing timpani, has a sweet string melody. This movement constantly seems like a drama in which Beethoven’s taking us somewhere, and eventually his journey through many keys brings us back to the initial theme. The minuet, which is really not a minuet, has a tune with a rising/falling, call/response feel between strings and winds. And the finale, with scurrying figures in strings alternating with orchestral outbursts, eventually comes to a dead stop — then the thunder of another Beethoven finale. The high-spirited Fourth has plenty of challenges, and the CSO played it beautifully to wrap this highly successful crowd-pleaser.

Tom Di Nardo is arts writer for the Philadelphia Daily News, and has written on music, opera and ballet for many publications. His newest book, Wonderful World Of Percussion: My Life Behind Bars, is the biography of famed Hollywood percussionist Emil Richards.