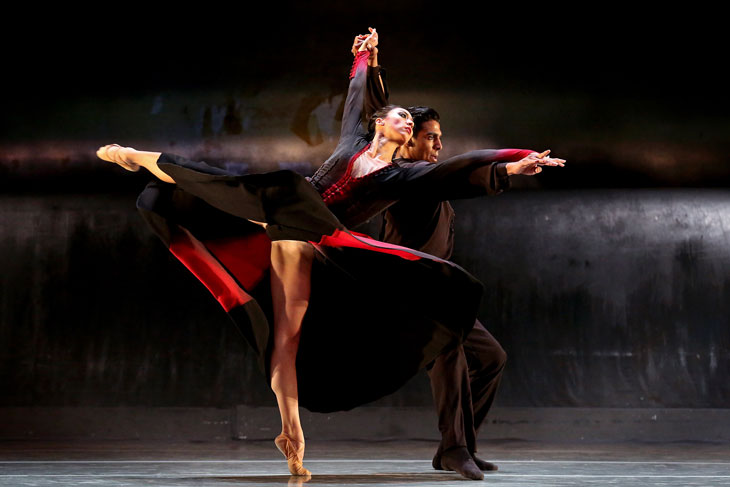 In the arch of a classical ballet, Jean-Pierre Bonnefoux said the pas de deux is the keystone that holds it all together.

The pas de deux, literally meaning “step of two,” is often seen as the climax of a full-length classical ballet. In the traditional sense, it is a duet between the two principal dancers — one male, one female — and is usually a dance that is steeped heavily in themes of romance and love.

At 8:15 p.m. tonight in the Amphitheater, the Charlotte Ballet will take the stage to pay homage to the iconic dance. With 10 separate pas de deux of all shapes and sizes, however, they are doing far more than just paying homage. They are also challenging the expected confines of the dance, experimenting with contemporary movement and seeking to elevate the pas de deux to a number that stands all on its own.

“I’ve always almost found the pas de deux to be the embodiment of dance,” said Sasha Janes, one of the event’s choreographers. “This evening provides the audience a tremendous variety of dance, because you’re going to see the classics and more contemporary ballets. It really shows the versatility of the dancers.”

“Versatility” seems to be the key word for the evening, as the relative flexibility of the pas de deux allows ample room for the dancers and choreographers alike to show off their various skill sets and genre backgrounds.

“For many people, it’s their favorite evening from our company,” said Bonnefoux, president and artistic director of Charlotte Ballet.

“One of the reasons it works so well is that we have dancers — and choreographers also — that have such diverse talent. It makes the evening very exciting.”

One of the evening’s most alternative numbers is a piece called “Baby I’m a Star,” an all-female piece choreographed by Joshua Hall, a dancer and relatively new choreographer of the Charlotte Ballet. According to Hall, the dance channels a jazzy, upbeat atmosphere reminiscent of Studio 54, complete with flashing lights and buoyant music.

“It’s more interactive,” Hall said of the piece. “I added some more interactive moments with the audience where the dancers are pointing at them, and the girls are going to be walking through the Amphitheater a little bit at the beginning. It’s definitely a crowd pleaser.”

Perhaps the most unconventional thing about this pas de deux, however, is that it’s actually a pas de trois.

“We’ve got to put a disclaimer on that one — he snuck in an extra person, so there’s three people,” Janes said. “But Jean-Pierre thought it was such a fun piece when he first saw it that he wanted to include it in pas de deux evening, which is the perfect venue for it.”

Another number that seeks to stretch the original outline of the pas de deux is Janes’ dance “Dangerous Liaisons.” In this piece — an excerpt from Janes’ full-length version of Dangerous Liaisons, adapted and modernized from the eponymous book — Janes contradicts the traditional gender roles of a pas de deux by choreographing it for two men. If that wasn’t enough, he also shatters its traditional themes of love, instead handing his leading men swords and squaring them off in a bitter fencing duel.

“It’s about vengeance and jealousy, and it’s more masculine,” Janes said. “I love seeing the connection between two dancers onstage, be it two men or a man and a woman or even two women. I love that connection.”

As for the swords, Janes said it was difficult to navigate the line between choreographing a fight and choreographing a dance, saying that he ultimately wanted more dancing than dueling. Either way, though, he said that working with props was a challenge.

“[The swords] are actually really difficult and really dangerous if you don’t do it properly,” Janes said. “When we first did it, it took us a good couple of months to actually choreograph it and piece it together, but when you see it, it’s only two and a half minutes long. You have to be very, very careful that nobody gets hurt, but it still has to look realistic.”

Janes’ second dance of the evening, “Playground Teasers,” is also another excerpt from a full ballet. It is a number that he describes as abstract and slightly comical, which in its full length features teasing and tickling among the dancers. Fitting with its playful theme, the dance was named by students at Chautauqua’s Children’s School several years ago. Janes invited the children in to watch rehearsals, and then opened up the floor for name suggestions.

“Some of the names they came up with were quite funny,” Janes said. “One of the name suggestions was ‘Tickling at Home Depot.’”

This pas de deux highlights the talents of dancing couple — and real-life couple — Anna Gerberich and Pete Leo Walker, for whom it carries a bit more emotional weight.

“It was choreographed when we had first started dating,” Gerberich said. “So I think of it as new love. It’s very simple, sweet and fluid.”

Apart from Hall and Janes, the evening of pas de deux will also feature other contemporary works from Mark Diamond and Dwight Rhoden. Diamond’s pieces, with names such as “City South” and “UHH!,” are bound to be a departure from the traditional pas de deux — which, according to Diamond, is exactly the intended goal.

“They’re meant to be lighter fare for the evening,” he said. “They’re not really about technique.”

First on the evening’s bill is “City South.” Diamond said that it’s an excerpt from a longer ballet that tells a mini-story about a couple who’s out on the town late at night.

Following “City South” is the pas de deux “UHH!,” which, Diamond said, is pronounced exactly like a groan.

“This is also a humorous piece,” he said. “It’s about an older couple who’s been together a really, really, really long time, and they argue about everything.”

According to Diamond, this piece is meant to be lighthearted and relatable — everyone knows that couple, he said, who’s just been together so long that they’re always getting on each other’s last nerve.

“It’s those older relatives — maybe an aunt or uncle or something — that just sort of wave their hand at each other, like ‘Uhh!’ They don’t want to get in any arguments, because they argue about everything and so it’s useless to bring anything up. It’s a fun piece about giving up, about not bothering to get into it anymore.”

Sit In, Stand Out

As for “Sit In, Stand Out,” the piece by Rhoden — a director of New York company Complexions and, according to Bonnefoux, “one of the most famous choreographers in America” — the work also follows a more contemporary frame of mind. It tackles the complex and weighty issues of the American civil rights movement against the audio backdrop of music by Nina Simone.

“It’s up to interpretation, but it’s definitely about civil rights, the cruelty that happened and how people were treated,” said Hall, who is the male lead in Rhoden’s dance. “It’s more abstract, and there’s not a definite storyline. But the music is so powerful in itself that it portrays the message just by seeing the movement with the music.”

While the evening of pas de deux is abounding with quirky and contemporary ballets for those who are a bit more experimental at heart, it also intends to deliver a significant number of traditional pas de deuxs for those who are suckers for the classics. Excerpts from Bonnefoux’s Balanchine-inspired choreography for
Coppélia will also be performed, which was last shown in Week Three when the Charlotte Ballet collaborated with the Chautauqua Symphony Orchestra. Bonnefoux is also re-staging Asaf Messerer’s choreography for “Spring Waters.”

“I think of it as being very joyous and free,” said Gerberich, the female lead of “Spring Waters.” “It’s a very celebratory dance.”

Glenda Lucena, ballet mistress for the Chautauqua School of Dance, is also staging two classical numbers. The first of the evening is the grand pas de deux that was originally choreographed by Marius Petipa for Don Quixote.

“It’s a very difficult ballet to execute,” Lucena said. “It shows the dancers’ special abilities together and individually. It is very challenging, but capable of transporting the audience outside the current space.”

Gerberich, who is undertaking the pas de deux alongside dancer Addul Manzano, said it is a dance that is both assertive and impressive.

“Don Q has all the dance tricks,” she said. “You have to be very strong, sort of fiery and Spanish.”

Lucena’s second staging of the night is August Bournonville’s pas de deux from “Flower Festival in Genzano.” It was originally created for Denmark’s Royal Ballet in 1858, and tells the story of two real-life lovers, Rose and Paolo. According to Lucena, each dancer in this pas de deux has a different challenge: the girl must be graceful, light and shy, while the male lead must be supple, energetic and quick.

“Rose and Paolo are in their 20s, they are a little more daring in their approach to one another, they play, and they are tempered by the sweetness of falling in love,” Lucena said. “It brings an emotional and historical moment to the audience.”

No matter where the evening’s pas de deux’s fall on the spectrum of dance — ranging from classical to contemporary — Bonnefoux feels that they all are deserving of a slot in the Charlotte Ballet’s evening of pas de deux. More importantly, he thinks it is important to expose the Chautauqua audience to all different styles of dance, both the traditional roots of the ballet and the constantly expanding, advancing innovation of modern dance.

“Because of the diversity of our dancers, every six to 10 minutes you have two new dancers coming out and dancing in a style that’s really different than the dance you saw before,” Bonnefoux said. “I think it’s a good chance for the audience to see, in one evening, eight or nine different works. And it’s sort of fun to do that.”