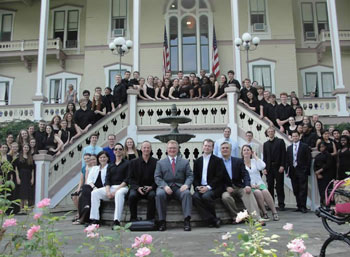 April Hartung | Provided photo
Students in the NYSSSA School of Choral Studies, outside the Athenaeum Hotel in 2013, return to Chautauqua at 2:30 p.m. Sunday in the Amphitheater.

The New York State Summer School of the Arts School of Choral Studies has been performing for Chautauqua audiences for as long as Jared Berry can remember, taking the Amphitheater stage to perform songs both classical and contemporary.

At 2:30 p.m. Sunday in the Amp, 64 students in the NYSSSA program will continue that tradition, but this time, things will be a little different.

About a month ago, NYSSSA held a Kickstarter campaign, crowd-sourcing about $11,000 for the filming of a documentary about the arts school. On Sunday, film crews and a producer from Mountain Lake PBS will be in tow, filming the choral students in action.

“It’s our hope that the documentary will be shown throughout the state and people will really get a chance to see, other that at Chautauqua, what goes into the NYSSSA programs,” Berry said.

NYSSSA is made up of seven schools throughout the state that offer studies in ballet, choral studies, dance, media arts, orchestral studies, theater and visual arts disciplines.

In the choral studies program, Berry said the students range in age from rising high school freshmen to rising college freshmen, from all across New York state.

“It’s very robust,” Berry said. “There’s a lot going on all the time.”

The Chautauqua performance comes one week before the end of the program, Berry said, and the students will travel to the grounds from Fredonia, where the choral studies program is based. They’ve already made the trip to Chautauqua once this summer to see Madam Butterfly and to talk to Chautauqua Opera Artistic/General Director Jay Lesenger.

“It’s nice for the kids to see what it’s like in that performance space,” Berry said. “And Jay is always so welcoming when he speaks to the kids. It gives them an opportunity to learn about the artistic decision-making and the administrative decision-making he does. For these students going into these fields, it’s great to hear.”

When the students themselves take the Amp stage, they’ll be performing everything from classical songs to more modern pieces, some in foreign languages, Berry said. The program for the afternoon includes “i carry your heart with me,” by David Dickau, Adre Caplet’s “Santus” from Messe a Trois Voix, Bogoroditse Devo from Sergei Rachmaninoff, the spiritual “Jerusalem” and a Scottish folk song “Loch Lomond,” arranged by Alice Parker and Robert Shaw.

“It’s really something,” Berry said. “Audiences are going to see students who love being here and love to perform. We hope to convey to the audience how much music means to us and the students. Hopefully, it will impact them as audience members as much as it impacts us.”

This is Sara Toth’s second summer as Daily assistant editor — the best job in the world (second-best is her off-season job as lecture and literary arts associate). A Gannon University alum, she interned at the Daily for three summers before spending nearly four years reporting for the Baltimore Sun Media Group. She lives in the newsroom and makes a mean pot of coffee.