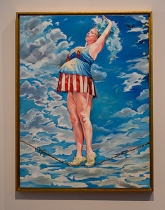 You’ve got to be taken by Jerry Saltz. Give him a microphone and he’ll likely put it aside and wade into the room and talk face-to-right-up-close-and-personal-face with whomever catches his fancy.

So here’s back at you, Jerry. If you are reading this, back at you because the show you selected for Chautauqua reads like one of your columns — not that we’d expect any less.

And all other dear readers, look out if Jerry returns to Chautauqua. He already has proven himself at the opening of the show he organized for Visual Arts at Chautauqua Institution — the 57th Chautauqua Annual Exhibition of Contemporary Art in the Strohl Art Center. Saltz is the senior art critic for New York Magazine, and when he visited the Institution he did go face-to-face with artists and others for a good long time, and hung around after hours to continue the conversation.

Perhaps the reader likes art shows that are “wildly overfilled, radiating heat and energy” with stuff that glimmers and carries a full load of chaos. These are Saltz’s words, lifted from one of his reviews. And such awaits in the main gallery at Strohl.

Saltz looked at the 762 submissions for the 57th at Chautauqua, and he overstuffed a selection of 39 mostly big things, such as:

It’s all about “The Everlasting Interrogation of Art.” Anything less is “Why Bother?”

And Jerry Saltz has made that very clear through the witness of his career, ex-senior art critic at The Village Voice and famously big rig, long-haul truck driver. Forget higher education. He never did it. This is his education for what is unknown. (Not much outcome in education for what is known, after all; as there is no news in old news).

So, the Saltz show calls to those who might like to gather for the adventure of naming these strange things and coming to know a little better the extraordinary purposes of art, among them how to consider anew or outright discover the ideas concealed behind appearances — often large notions such as “wonder”— notions that are otherwise difficult pronounce.

The visitor must look carefully. Everything is at least a little strange.

But most discoveries begin in bewilderment. Some are modest curiosities, such as with John Balacki, for instance, a physician from Olean, New York, who offers a slight watercolor about a double hung-door in “Tusca” (Tosca? Tuscany?). Anyway, one of the doors is missing, and beyond its yawn is an unsettling darkness.

Soumiya Krishnaswamy from New York, on the other hand, won the Visual Arts at Chautauqua Institution award for a 4-foot-square oil on canvas depicting a reassembled elephant girl with five legs emerging from her head like a tiara, all held together by one of her braids: cross cultural in extremis.

Charles Mintz from Cleveland, who won the James O’Brian Memorial Award, requires some work. His photographs depict strange-enough living situations within dead-pan photographs — all the more wicked, then, to discover in his series of mid-century aluminum government-issue housing a tiny dog peeking out from between closed drapes, while the dog’s masters pose on the porch with offensive lawn adornments and the American flag. The day to day has sufficient amazements.

In Saltz’s world, there is no award for degree of difficulty, no special recognition for the winning number of angels dancing on the head of an artist’s pin. Colin Alexander from Maryland took home the Harold R. Anderson Award for a seemingly quick-brushed acrylic on canvas outlining a desktop monitor displaying the “Happy Baby Pose on Home Yoga DVD.” Maybe it was suggestive, but likely the point is that to create suggestion is a stretch proposition with this painting, if not a pun.

And so it will go for the viewer, should a visit be in the cards. There will be a precarious oil by Candice Flewharty of a pregnant tightrope walker with patriotic tassels on her bosom, another painting by Mike McConnell that deconstructs elements along the drive from Esalen to Monterey, and another by Leslie Mathis showing a back-street factory alley in Jamestown.

An 8-foot-tall stereopticon — by Mark Rentschler — rigged up with empty paint cans and mirrors within a complex tectonic built to reassemble the image of a broken coffee cup argues on behalf of the astonishing project of art, as does a more quiet intaglio (soft ground, line etching, aquatint by Diana Behl) — just an exquisite soft music, that could be a score by the likes of the late Morton Feldman, one organized by a descending line of zeros anchoring the left hand side of the page.

Oh, and finally, in the event you were wondering about the bounty from the Warhol gravesite:

It was collected by Madelyn Roehrig, a Pennsylvania artist. Her work consists of a DVD flicker piece documenting the pile-ups on the grave, adjacent to a plexi box of the prize she purloined, among the objects a Campbell’s soup can, several plastic skulls, a bunch of sketchy drawings, a rosary, a gold-plated plastic “Peace” sign, wigs, holy water and a pillow.

You may be curious to see. Then go figure. It won the first prize Bellinger Award.

Anthony Bannon is the executive director of The Burchfield Penney Art Center and research professor at SUNY Buffalo State. He was an art writer for The Buffalo News and longtime director at George Eastman House, the International Museum of Photography and Film in Rochester, New York.

Correction: This review has been updated to correct Colin Alexander’s home state and the title of his piece.