“Flora Garden” by Susan Beiner is part of the exhibition “FLOWERS,” opening Sunday in Fowler-Kellogg Art Center. The piece is made of aluminum, spray enamel, wire and grommet. 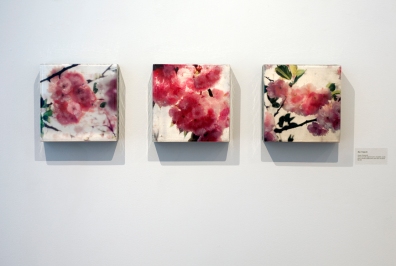 A new exhibit at the Fowler-Kellogg Art Center offers twisted takes on traditional representations of flowers in art, featuring floral creations of wood, ceramics and metal rather than the oil and watercolor variety.

Judy Barie, director of galleries, wanted a “splashier” exhibit to entice people up to the second floor of the gallery, a perfect place to display three-dimensional work, she said. She also wanted to avoid the media usually used to depict flowers, such as quilting and watercolors.

The opening reception of the exhibition, “FLOWERS,” will be held 3 p.m. Sunday in the Fowler-Kellogg Art Center.

The work of ceramist Susan Beiner offers a departure from traditional depictions of flowers. The thought of eventual environmental ramifications caused by cloning and hybridizing plants influenced the shape of many of her pieces, she said.

Her wall piece “Synthetic Reality” consists of hybridized ceramic shapes, some with polyfill-stuffed foam pieces fitted over them.The bright, unnatural colors of the piece mimic the glowing rainbow colors of an oil slick and further illustrate the idea of genetically modified flora.

“Artificial Selection” features protruding Plexiglas rods that splice the piece into different segments. Beiner said it was meant to resemble a long conveyor belt where the images become increasingly unnatural and manufactured to echo the artifice of greenhouse-grown plants and produce.

“We as consumers try to make everything the same so it’s easier to have a choice,” Beiner said.

The work of Jeri Eisenberg will also be displayed in the exhibit. Eisenberg’s pieces are from a decade-long series of work she calls “A Sojourn in Seasons,” which consists of images of tree-covered landscapes.

All of her pieces begin as photographs she takes with an unfocused lens. She then prints them on Japanese Kozo paper, which further softens the image, before she treats it with encaustic wax to protect the image, she said.

She hangs the paneled pieces from acrylic bars that allow them to float and rustle freely, to mimic the blooming flowers of trees in nature, she said. When hung in front of a white wall, the translucence of the encaustic-treated panels allows light to illuminate the piece from within.

Eisenberg calls her discovery of flowers as an inspiration a “happy accident.” She had received a grant to create a camera obscura in unused industrial spaces. A camera obscura involves blocking light transmission into a room except for one small hole. It mimics the way a camera works and produces an upside-down, reverse image of the exterior scene, inside the interior of the room.

One day, Eisenberg made the hole too large, and the resulting soft-focused, abstract image of flowering trees on the street outside fascinated and intrigued her. Around that time, Eisenberg was also dealing with her father’s increasingly poor health.

She said the fleeting nature of blossoming trees echoed the nature of her father’s situation.

“These are things that we can’t hold on to for long, and it reminded me of how ephemeral life is,” she said.

Mary Bailey, a lifelong Chautauquan, has several wood sculptures featured, some made specifically for the exhibit.

Bailey said her work has always had an organic source of form. Once she found her voice as an artist, she found inspiration in the freedom the form of plants offered her, she said.

Her sculptures always start as drawings, Bailey said. Some of her pieces have ebony pencil images drawn over the wood. She uses the graphite pencils to keep the wood from yellowing, as she favors a natural, unvarnished look.

A large sculpture titled “Cornucopia” is covered in images Bailey drew in sort of a stream of consciousness. A baby photo of her mother inspired one image of a girlish face while another is a caricature of her husband, she said.

“Cornucopia is just everything, the fullness and richness of life,” Bailey said.

The flower is a universally recognized symbol, Bailey said, but at the same time it allows for limitless variations and expressions.