Editor’s Note: The following piece by Chautauquan David Zinman, originally written for a general audience unfamiliar with Chautauqua Institution, has been edited for publication in The Chautauquan Daily. 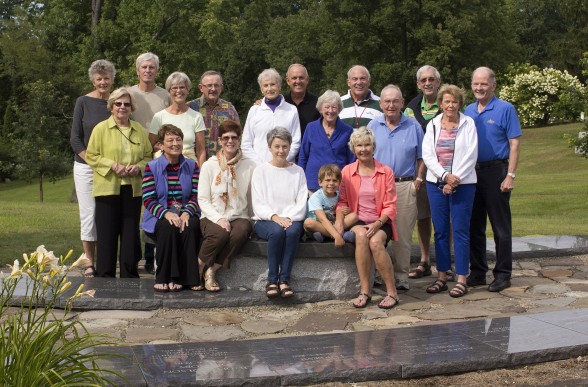 Something caught my eye at the century-old graveyard just outside the grounds.

On a grassy knoll in Chautauqua Cemetery, 32 headstones lay flat on the ground, linked in a kind of oval shape. Except for two that marked the graves of people who had recently died, the rest bore no date of death.

Each polished granite headstone had a name and, in some cases, an epitaph. But they all had only a birth date.

When I came closer, I saw an inscription that explained what the burial site was all about. It said, “A Circle of Friends.”

The friends — the owners of 30 of these 32 burial plots — are alive, and they have an active interest in their gravesite. They have decided to be cremated and have their ashes buried alongside each other. At least once a year, they visit their final resting place.

Every summer, the “plotters” (as they call themselves) hold a cemetery party, complete with wine and sometimes even champagne. They remember the departed and celebrate another year of life on the right side of the grass.

Cemetery officials say the friends’ gravesite may be a new idea. And so I decided to try to find out more about it.

It took only a few days to find the site’s designer, Chautauquan Judith Gregory, an artist and sculptor from Davidson, N.C. Gregory, 66, and her husband, Fred, have a second home on the grounds.

To many, death remains a dark and depressing subject. Gregory’s group has taken a different tack.

“Since death is inevitable,” she said, “we thought we would try to make our gravesite something positive. It’s comforting to know we will be with our friends after we die in a place we all like.”

Gregory said she always regretted seeing her parents buried in a cemetery so “unattractive and unwelcoming” that she rarely visits. But it motivated her to see that she and her husband had a pleasant-looking gravesite.

The idea for a burial spot shared by friends began in an offhand way. Tom Small, a 72-year-old member of a group of summertime neighbors (including Gregory) who go on sightseeing trips together, heard the Chautauqua Cemetery was having a sale of plots.

Small suggested everyone in the group buy a plot and plan to be buried next to each other.

“Since we’re such good friends who journey together in life,” Small said, “why don’t we plan to go to eternity together on our last trip?”

He said this tongue in cheek — but the others weren’t laughing. They saw the friends’ gravesite as a reaction to today’s trend that sees many families scattered to the four winds. This close-knit group of friends thought of themselves as replacements for their own faraway families.

Most of the group’s members are retirees who come from a wide range of backgrounds: Some were lawyers and doctors; others had jobs in finance and education. There is a computer expert, a librarian and several salespeople. One of the deceased friends, Denny Buch, was an airline pilot.

The group’s common bond is the fact that they are all Chautauquans; many have come here year after year since childhood.

Acting on Small’s idea, each member of the group bought a cemetery plot for $150. Each friend also contributed another $1,500 for the design and construction of the gravesite.

The sum also paid for headstones and inscriptions that sometimes included an epitaph. A few are philosophical. “To make an end is to make a beginning,” Sorenson wrote. “The end is where we start now.”

One couple wrote their epitaph in rhyming couplets that carried over from one headstone to the other. “We had joy, we had fun,” reads the headstone of William Perkins III. “We had seasons in the sun,” continues his wife, Virginia, on her adjoining headstone.

Others took a tone of dry humor. “Say it isn’t so,” lamented Albert Joseph Turbessi.

John Thompson (Tim) Peters, a lawyer, wrote his epitaph in Latin: “Res Ipsa Loquitur.” The words refer to a legal doctrine that says the facts are so obvious there is no need for further details; the thing speaks for itself.

“Remember-Return-Reflect-Renew-Receive-Reclaim.” That’s the thought carved into a stone bench installed for visitors.

The joint grave project began in 2005, when the group submitted its plan to the cemetery board. It took the board four years to approve the project.

“It wasn’t that we were disagreeable to the idea,” said Sylvia Faust, the board chairperson. “But we got some complaints [from other plot owners]. People generally don’t like change.”

So the board kept asking for changes to the plan until officials finally felt the site conformed to the complex regulations that New York state has set for cemeteries.

Cemetery officials thought the friends’ burial plot might be an original concept. They said they knew of friends buried next to each other, but they could not recall a cemetery project designed for such a large group, or one planned in advance while the plot owners were still alive.

“As far as I know, it seems to be unique,” said Robert Fells, executive director of the International Cemetery, Cremation and Funeral Association, which has 7,500 members.

Last August, I was invited to the Chautauqua plotters’ summer picnic. I found about two-dozen plotters chatting and snacking as they sipped chardonnay and pinot grigio.

I asked Griff McDonald, a recently retired financial adviser from Ann Arbor, Mich., how it felt to be looking at his own grave. He was silent for a moment. Then, he smiled and said, “You notice there’s no [death] date on it. If there were, then I’d be worried.”

Jane Buch, the wife of the late Denny Buch, said that at first, she thought the burial idea seemed “a little bizarre.” But then she saw the positives in the plan: the yearly get-togethers and the fact that the project relieved everyone — particularly the plotters’ children — from having to make last-minute burial arrangements.

The adult children of the plotters were the subject of a meeting after the picnics. The plotters appealed to them to oversee the gravesite and maintain its beauty in the years ahead.

Buch’s daughter, Amy, said she was a little taken aback when she learned that she was not included with her parents.

“But now that I see how it worked out, I feel good about it,” she said.

Amy became misty-eyed when she recalled her father’s funeral. She said about 200 people came, and memories of that day still stay with her.

“We had a big celebration of his life,” she said. “We all shared stories. There were tears — and there was laughter. Then, we went to the Chautauqua Golf Club [where he was a longtime member] and continued the celebration. It was like what you would see at a wedding. His presence was everywhere. People remembered him as a ‘good man with a great smile.’ And those words are on his gravestone.”