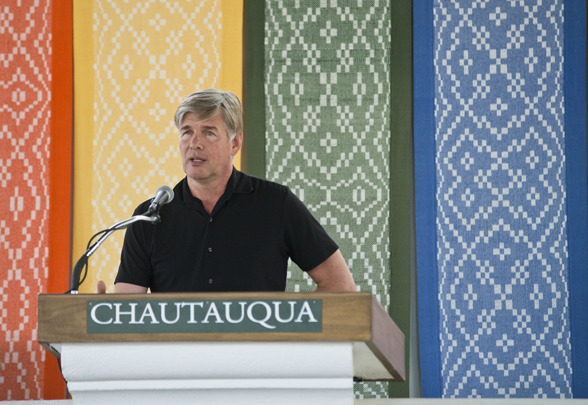 Fyodor Dostoevsky, the author of Crime and Punishment,  once said, “There’s only one thing I dread: not to be worthy of my sufferings.”

Inmates sentenced to life in prison, Jacques Verduin said, are the ultimate “other,” the most forsaken population in American society. They have only had the opportunity to become worthy of their sufferings since the emergence of programs like the Insight Prison Project and Insight-Out — both of which Verduin founded — which foster rehabilitation and self-development.

Verduin has worked within San Quentin State Prison for the last 17 years, where he has developed programs to help inmates learn to act nonviolently, develop emotional intelligence and mindfulness and understand victim impact. He delivered his Interfaith Lecture, titled “Crime and Opportunity,” at 2 p.m. Tuesday in the Hall of Philosophy.

“I got it,” said an inmate in Verduin’s Guiding Rage into Power program at San Quentin.

“Really? What did you get?” Verduin asked.

Then someone else chimed in: “I got something, too: Healed people heal people.”

These insights sum up the philosophy of GRIP, an offender accountability program that treats crimes both as symptoms of larger social failures and also as offenders’ inarticulate pleas for help. Anger is treated as a secondary emotion, an expression of hurt, fear or humiliation.

Part of the GRIP program’s curricula is to add up the amount of time each group member has served. In the particular group that Verduin was telling the audience about, there were 936 years served between 34 men. They also added up the amount of time they were in “imminent danger,” or the amount of time it took for them to get from anger to acts of violence. Among those 34 men, the total imminent danger was one hour, 40 minutes and 12 seconds. After comparing the two drastically different measures of time, all the members pledged never to let such a moment happen again.

The moment of imminent danger also is equated with another phrase: “image dying,” which is the experience of disrespect to one’s self-image.

“When that image dies and you’re down,” Verduin said, “you’re humiliated, you have to substantiate to get back on top. And you do that with violence.”

He claimed that what all violent criminals have in common is that they’re trying to substantiate their image. They either feel like they don’t belong or like they’re outcasts.

“We as a society are losing that spirit of belonging together,” he said. “And nowhere else is that [more strongly] expressed than in our prison systems.”

Verguin argued that today, it is the task of members of society to rediscover themselves as “the other.” When someone is convicted of a crime, it should be viewed as a sign of social breakdown, rather than a problem that isn’t at all connected to society at large.

“We are in a trance about how we imprison people in our nation,” he said.

The United States is home to less than 5 percent of the world’s population, but it contains almost a quarter of the world’s prisoners, Verduin said. The amount of money that states spend on prisons is six times higher than what they spend on education. More African-American men between the ages of 18 and 35 will go to prison than will go to college. More than 60 percent of prisoners in the U.S. are African-American or Hispanic, but those two minority groups make up less than 35 percent of the U.S. population. And more than 500 prisoners have been in isolation cells in California for more than 10 years.

“The invitation is to join [in Insight-Out], but the invitation is just as big for you to start moving into your own prisons and discover working in prisons as engaged citizenship,” he said. “Look at it — if people in our communities don’t live with the rules we’ve all agreed by, then there’s a task for us to step up and reteach those values.”

Verduin added that people shouldn’t be afraid of visiting prisons or worry that they have nothing to offer inmates.

“Don’t be fooled,” he said. “You can take your knitting group into prison and make people happy and start making a difference.”

Verduin finished the lecture by reciting what members of the GRIP program read before pledging to be peacekeepers and servants to their communities, a passage derived from the Sufi tradition:

“Overcome any bitterness that you may feel because you are not up to the magnitude of the pain that was entrusted to you. Like the mother of the world carries the pain of the world in her heart, each of us is part of her heart and therefore endowed with a certain measure of cosmic pain. You’re sharing in the totality of that pain. You are called upon to meet it in joy instead of self-pity. In offering your heart as a vehicle to transform suffering into joy, your service will set you free and bless all around you.”