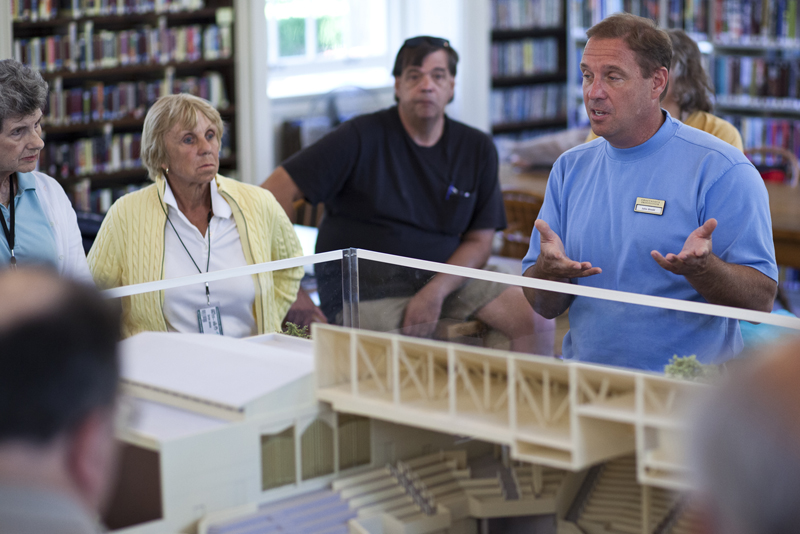 The biggest news at Smith Memorial Library this season isn’t about books.

It’s about the impressive model of the proposed Amphitheater renovations, which has dominated the library’s lobby since being installed July 6. The installation of the delicate model was performed by eight people under the watchful and anxious eye of its New York City-based moldmaker.

The proposal to renovate Chautauqua Institution’s iconic Amphitheater has been the subject of much buzz around the grounds for nearly two years. Now that Chautauquans have something tangible to look at and comment upon, the buzz has considerably been amped up.

“The response to the model and to the project from the Chautauqua community has been most gratifying,” said John Shedd, Institution administrator of architectural and land use regulations and capital projects manager. He conducts 90-minute dialogues beginning at noon Mondays, Wednesdays and Fridays in the library.

The renovation of the Amp is the largest public works project ever proposed for the grounds.

With a budget estimated at $25 to $30 million, the renovations would involve lowering the current floor by 15 feet; reducing the number of roof support columns by approximately half; replacing the current ramps in the upper seating area with steps and handrails, while retaining ramps on the lower part of the main floor for handicapped accessibility; renovating or replacing the current benches; replacing most of the back of the house, while preserving the Massey Organ Chamber; installing new bio-swales, rain gardens and other stormwater management improvements; increasing seating capacity by 10 percent; extending the roofline so all seats are covered; and removing the bleachers. And this is just a partial list of the proposed changes.

Shedd is joined in the public outreach effort by former Institution vice president Charlie Heinz, who leads the 90-minute discussions beginning at noon Tuesdays and Thursdays.

Chautauqua Institution staff members have prepared a list of frequently asked questions and answers regarding the planned Amphitheater renovations. Some of the most frequently asked are summarized below. The complete list is available in the lobby of Smith Memorial Library.

Will the roof cover the entire seating area?

Yes. The cutaway model shows only half of the roof structure so viewers can see the construction and floor configuration.

Will the current benches be replaced?

Will the red pedestrian bridge behind the Amp be removed?

In the current design plan, yes. We are currently discussing the possibility of relocating it. We are well aware of the sentiment surrounding the bridge.

What about the interior structural columns?

The current columns are roughly 20 feet apart. The new columns would be approximately 38 feet apart, so there would be many more seats with an unobstructed view.

Will the back porch be removed?

It would only change to a back patio with good access to the speakers, guests and performers following programs and presentations.

Will the women’s restrooms be larger?

There will be more fixture counts than in the current restrooms.

Will the stage and orchestra pit be larger?

Acoustics should be the same or slightly improved.

The sessions start with a few remarks by Institution officials but quickly evolve into lively question-and-answer periods.

Such was the case last Friday.

Shedd arrived at the library a couple of minutes early to find several curious spectators perusing the Amp model. Others joined the discussion as if drawn by a magnetic force, clustering sometimes two and three deep around the model.

With patience and good humor, Shedd answered every question from the audience, gamely remaining until another scheduled appointment ended the session at nearly 2 p.m. More than 100 people checked in for at least part of the conversation.

As Heinz had done last summer in leading preliminary discussions — without the benefit of a model for reference — Shedd emphasized that the Institution is relying solely on philanthropy to fund the massive project, and that it will not proceed to the next step without secured funding.

“We are now at the end of the design development phase,” Shedd told his audience. Once funding for the entire project is in place, the “construction documents phase” will be completed — a phase of design that takes apprximately three to four months. Subsequent steps include issuing construction documents to qualified bidders and awarding the contract.

During a spring time-frame, materials and equipment would be ordered  and stored over the summer season. Construction would begin immediately in the fall with the goal of completing the project during the off-season, without losing a summer season.

Though outlining the different stages of the project, Shedd emphasized that he cannot stipulate as to the exact timeline or when the next stage of the project will commence.

“I cannot emphasize this enough: We will get the funding first,” Shedd said. “There will be no borrowing from commercial lenders. There will be no reliance on our capital funds. We will rely solely on philanthropy.”

“We are optimistic, but this is a lot of money,” he said. “There is a process for raising the money, and we respect that process.”

The current Amp is generally regarded as a 120-year-old structure, but much of the back of the house was more recently appended to the main structure in a haphazard fashion.

Shedd said that even without the ambitious renovations, the Amp would still need extensive repairs, as the existing structure suffers from natural deterioration. The roof, floors, electrical system, paint, lighting and attic space are all under duress and would need to be upgraded for safety as well as for utility.

“On top of all that,” Shedd said, “the Amp needs some basic structural retrofitting and alignment. It is sliding slightly but measurably toward the lake each year. So the building does need some extensive attention.”

The lead architect for the proposed Amphitheater Rehabilitation Project is Marty Serena of the Chicago-based Serena Sturm Architects. Serena has participated in one of an ongoing series of meetings with the Amphitheater Advisory Group, involving Institution officials and a select group of Chautauquans.

“I initially got started with this Amp project working with a study group to understand how long-term Chautauquans felt about the Amphitheater and how to make it serve Chautauqua,” Serena said. “I already had some familiarity with the culture here because I had been working on a two-generation Chautauqua home.

“All of us on the design team are well aware of the historic nature of the Amp,” Serena continued. While they have considerable historic project experience, the team also intends to engage a historic preservation architect in the process going forward, he said.

Serena’s firm has a long history of partnerships with communities and churches.

“I think at one point our firm did 30 churches in 10 years,” he said. “We’re accustomed to the idea of trying to design improvements to older buildings which have become familiar to the individuals whom they serve. We want to manage change comfortably for as many people as possible.”

There were some inevitable delays this spring in the project’s design development phase, Serena said, forcing the design team to postpone a May presentation to the Institution’s board of trustees until August.

Serena sees this delay as a positive thing, as the team can now incorporate comments and questions from Chautauquans in their presentation.

There are several means available for Chautauquans to register their views on the new Amp project. Comment and question forms are available at the library; there is also a box to deposit them there. Community members can also email amp@ciweb.org, and Shedd and Heinz will continue to collect oral comments and questions from their library appearances.

A four-page list of frequently asked questions and answers compiled by Institution staff is available at the library, and some of the most popular are compiled  in the sidebar at right.