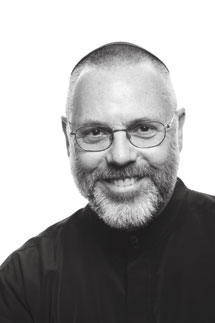 When Rabbi Rami Shapiro received the call to give a lecture on happiness in Judaism, the request took him by surprise. Those aren’t words he typically associates.

But happiness in his spiritual life is a whole different question. Shapiro’s Interfaith Lecture at 2 p.m. today in the Hall of Philosophy will discuss the deep-seated happiness he derives from the Ashrei, a two-part prayer that addresses the joy of nature.

“It’s all about a certain kind of understanding that brings you happiness,” he said.

Shapiro viewed the prayer as merely a liturgical obligation until adulthood, when a rabbi explained to him how its contemplative and mystical nature opens up a larger reality.

He makes a distinction between momentary happiness and what he calls a “deep-seated existential joyousness” felt just from being alive.

Shapiro doesn’t ignore the fleeting moments of joy, but he thinks the everyday ups and downs are just part of life.

“If I use that kind of happiness as a standard, as a measure of my existence, I’ll be miserable,” he said.

Instead, he focuses on long-term happiness. Shapiro has not practiced as a congregational rabbi for 13 years, so his focus has shifted from nurturing a vibrant Jewish community to helping people to discover their spirituality.

He tries to help others break free of their conditioning, or the labels and masks people hide behind, he said; even Judaism is just a kind of conditioning.

“That realization is beyond religion, and it leads to a sense of independence and freedom that I think is at the heart of spirituality,” he said. “And when you experience that, I think, that is the kind of happiness I’m talking about.”

Through teaching Ashrei, Shapiro wants to arm the audience members with a new way to deepen their own sense of existential joy.

“Hopefully those who are interested will try it and find that it works for them as well as it works for me,” he said.