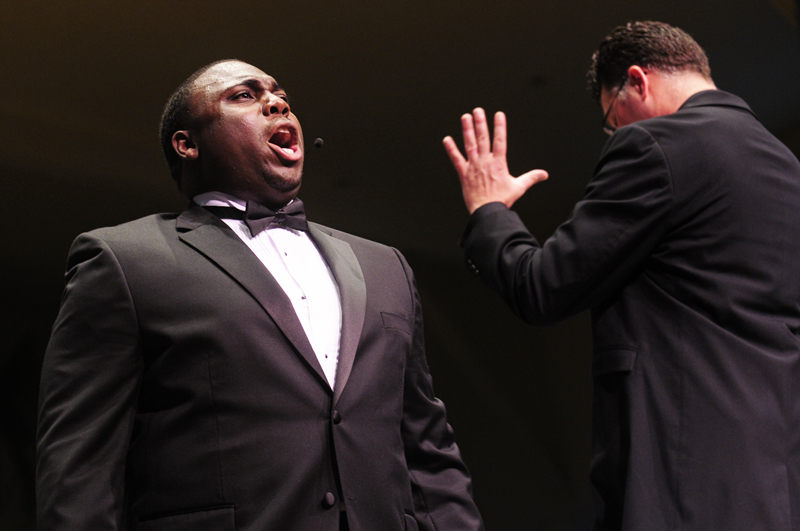 Baritone Lawrence Mitchell-Matthews performs a selection of African-American spirituals aside guest conductor Steven Osgood and the Chautauqua Symphony Orchestra during Thursday evening’s performance in the Amphitheater.

The notion of linking Chautauqua Symphony Orchestra performances to the week’s theme is as lovely as it is impractical. Thursday evening in the Amphitheater, guest conductor Steven Osgood obliquely acknowledged as much in his podium remarks.

Osgood said of his CSO, “For 27 concerts, they are constantly digesting new music, and tonight we’re playing a work that probably none of these musicians has played before. The fact that we can bring this music to you is a tribute to them, and I’m very grateful.”

The “new music” in question was William Levi Dawson’s “Negro Folk Symphony,” the capstone on a program that mirrored Week Four’s “America, 1863” theme.

As a scene-setter, it would be hard to top Roy Harris’ 1934 fantasia on “When Johnny Comes Marching Home,” a Civil War song tellingly claimed by both sides. Osgood’s brisk reading kept the music on its feet while allowing for a bit of Ivesian weirdness in the wandering, harmonically ambiguous violin figures in the work’s slow middle section. A lost soldier, maybe? Roy Harris is a great American original, and it seemed fitting to hear his singular voice in such a uniquely American setting.

Antonin Dvořák famously said, “In the negro melodies of America, I discover all that is needed for a great and noble school of music.” Marvin Curtis was wise to let these great and noble melodies speak for themselves in his arrangement of five traditional spirituals. Curtis’ touch was spare: A churning pentatonic figure in the cellos to open “Wade in the Water,” nicely flowing, slightly irresolute harmonies flow behind “Balm in Gilead.” The young baritone Lawrence Mitchell-Matthews, a protégé of Curtis, may never have sung in a venue as large as the Amp, but a few moments of unsteadiness aside, he projected these great and fundamental melodies with fervor and respect. Both he and Curtis, who was in the audience, were appropriately rewarded with the audience’s gratitude.

Copland’s “Lincoln Portrait” is public music in the composer’s full-on Americana mode. Here are the wide-open harmonies, spacious brass chorales and “now you hear them” quotations of American folk tunes, the kind that used to be sung by primary school children in the golden age when there was music in the schools. Composed as a morale-booster during the dark early days of the second World War, it was intended to be big and inspiring.

It could hardly have been otherwise when Lincoln’s stirring words are finally sounded in the work’s second half. These words are the King James Bible of American speech, the DNA of how we express ourselves as a people and how we see ourselves as a nation. Gilding the lily, the narration introduces Lincoln’s words with the biblical device “…and this is what he said.”  It’s hokum, of course, but very moving hokum, especially with the brass choir blazing behind the Gettysburg Address.

Marty Merkley spent his early years in the theater and he brought this experience to the narrator’s microphone, set stage right by the last row of the first violins. Coordinating speaker and music is a tricky notion at best, and the flow of Lincoln’s rolling cadences was sometimes interrupted as Merkley waited for Osgood’s cues. The sound balance between narrator and orchestra was sometimes problematic, too. Still, the performance did what it was intended to do, and the audience came to its feet.

Dawson’s “Negro Folk Symphony,” though, was the real centerpiece of the program. Osgood spoke movingly about the music, its connection to Chautauqua (the composer was a trombonist in a traveling chautauqua orchestra) and his delight in conducting it. One wonders how much preparation time he had for it, coming so soon after a demanding performance of Britten’s Peter Grimes only last Saturday. In any case, it didn’t matter, as the CSO tore into this music enthusiastically.

Despite the symphony’s title, the music speaks with a pronounced Bohemian accent. Echoes of Dvořák were everywhere, a tribute, perhaps, to the Czech composer’s ability to internalize (or perhaps to establish) the American symphonic language. The trumpet calls from the finale of the G-major symphony make an appearance in Dawson’s opening movement, which Osgood hustled along efficiently, and a plaintive English horn melody in the slow movement inevitably recalls the New World Symphony’s “Going Home” quotation.

That middle movement nocturne was especially effective with the lanky conductor establishing a haunted atmosphere that neatly set up the crowd-pleasing finale. That movement has a lot of climaxes, but when the old folk melody of “Hallelujah, Lord, I been down into the sea” emerges triumphant at the end, it’s hard not to come to your feet. And that’s just how a happy and grateful Amp audience responded to an evening of generous music making.

John Chacona is a freelance writer for the Erie-Times News.