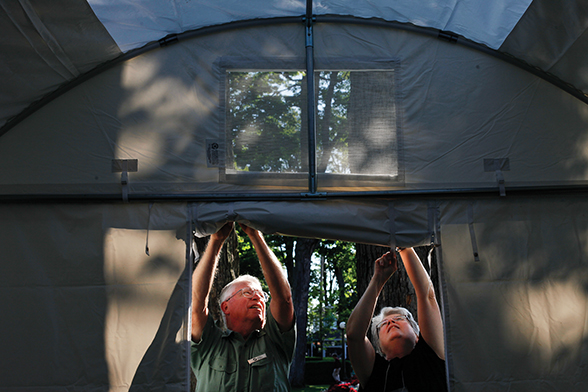 The first of the season’s two Crafts Alliance juried fine crafts shows began on Friday and will continue from 10:30 a.m. to 5:30 p.m. Saturday and Sunday on Bestor Plaza. The second show will be held the weekend of Aug. 9, 10 and 11. The shows present the work of more than 75 craft artists and can be considered a junction of art and commerce — a hybrid combining the best characteristics of an art gallery and a bazaar.

“We hope people will like what they see and take some home with them,” said Don Partch, president of the Crafts Alliance and a sterling silver jewelry maker.

The July and August shows continue the 30-year Crafts Alliance commitment to showcasing and introducing the work of these talented artists to Chautauquans.

“We exist solely for the purpose of supporting fine craft art,” said Christina Rausa, the executive director of the Crafts Alliance.

An instant tent city, a logistical miracle, rises on Bestor Plaza the Friday of the show weekend. The shaping of next year’s shows begins almost as soon as the artists pack up their tents and leave the grounds.

Recruiting is the Craft Alliance’s essential task. Whether exploring websites, attending craft shows or pursuing word-of-mouth recommendations, Rausa’s goal is to put on a show that attracts high-end artists who also offer art at an affordable price. She also tries to strike a balance between established exhibitors and the introduction of new fine craft artists.

True to the goal of bringing new artisans to the Chautauqua audience, the July show features 18 new exhibitors, including Rebecca Hungerford, a pewter metalworker; Jeri Gandee, a ceramic artist; and Yvonne Stocklosa, a stained glass artist.

A trio of nationally known jurors evaluates the artists’ work for inclusion in the show.

Marc Levine is a sculptor and silversmith at the School of the Museum of Fine Arts in Boston. His work has been exhibited at the American Craft Museum in New York City, the Smithsonian Institution in Washington, D.C., and London’s Contemporary Applied Arts.

Nancy Cole Kelly recently retired from a career organizing craft shows and managing galleries. From 2003 to 2005, she served as artistic adviser and director of Arts at the Gardens, a fine craft show held at Sonnenberg Gardens & Mansion State Historic Park in Canandaigua, N.Y.

Ceramic artist Carl Shanahan has been an art professor at the State University of New York at Geneseo for the last 40 years. He has exhibited at many galleries, including the Burchfield Penney Art Center in Buffalo, N.Y., and has served on the board of directors for both the National Council on the Arts and also the National Council on Education for the Ceramic Arts.

Artist applications for admission are judged on three criteria: The photographs of the work that the artists must send in before the show, the appearance of the artist’s booth and the quality of the artist’s work. The jurors do not see the names of the applicants. They also choose a recipient of the $400 Jurors’ Award, which will be presented on Saturday.

Partch remembers when the show was just one card table in front of Smith Memorial Library. He observed that during the past 30 years, the show has grown both in its number of exhibitors and also in its quality of work.

“We bring craft artists from all over the country,” he said. “The present quality is normally what you would find in a large urban area.”

When the artists leave, Rausa will pause — and then start preparations for the 2014 show. Her goal for the future of the Crafts Alliance is to define the executive director’s role in the organization and to encourage a new generation of leaders, who will hopefully bring the Crafts Alliance craft show to the Institution for years to come.