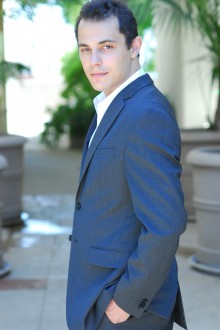 Ballet and opera will take center stage at the second Music School Festival Orchestra concert of the season.

A Romanian-born composer, Vizireanu is a doctoral student at Arizona State University. He chose the five arias, which range from pieces by Sergei Rachmaninoff to Léo Delibes to Imre Kálmán, to take advantage of the freedom he has been given for this concert.

“With an opportunity like this, where you have a great orchestra and a large instrumentation, I just said, ‘Look, what am I not going to have the opportunity to conduct that I really want to do now?’ ” he said. “I tried to tweak [the arias] to some degree to what fits with this concert, what gives a widespread array of styles.”

Five former students of the School of Music’s Voice Program will join the orchestra onstage. Vizireanu has been working with the orchestra to create an operatic accompaniment for the singers.

“It’s very much passion, very much [the] crazy plots of an opera where everyone is killing everyone or stealing their wives or something,” he said.

Muffitt’s portion of the concert focuses on the music of two ballets: Pyotr Ilyich Tchaikovsky’s Suite from Sleeping Beauty, Op. 66a, and Igor Stravinsky’s Divertimento from “The Fairy’s Kiss.” Even without dancers on the Amphitheater stage, the music itself conjures images of ballet.

“The idea of a lighthearted dance playfulness, and the stage — trying to evoke what’s on the stage,” Vizireanu said.

“What I really like about this group is not just that they work very hard, which otherwise you can’t do anything without, but they respond very quickly to what you ask for,” Vizireanu said. “They’re not slackers. When they’re there to work, they are 100 percent with you, they really hear what you say and they really try to adopt it, and they remember for the next time.”

Vizireanu considers himself lucky to be working with such a high-quality orchestra because he doesn’t have to worry about teaching them how to play each note exactly right; they already have the basic knowledge. Subsequently, he is able to focus on his own art.

“You’re free to express yourself, you’re free to find out, ‘What do I want with this piece, how can I show what I want from this piece?’ and so on,” he said. “You’re free to respond to them, and have that kind of symbiotic relationship with them. I think that’s the thing I enjoy most — the better an orchestra is, the more you can offer them.”