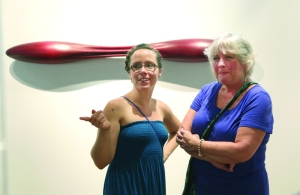 Bethany Krull, of Buffalo, Ny., and Suzanne Fellows, of Wyomissing, Pa., discuss the Visual Arts at Chautauqua Institution exhibition “Wood: On and Off the Wall” at Strohl Art Center on Sunday. The piece behind them is “Diverge” by Jesse Walp.

Chautauqua Institution’s first-ever wood art exhibition, “Wood: On and Off the Wall,” is now open.

“I’m a real lover of craft,” said Judy Barie, the Institution’s director of galleries. “I love three-dimensional work, so that was why I chose to open up with a craft show this season.”

“When I carry these shows,” Barie said, “I try to find something unusual in those mediums. For instance, with the wood I wasn’t just going to do any classic bowls or anything like what people are used to seeing.”

Barie felt especially excited about the work of Michael Bauermeister. The week Bauermeister trucked his large wooden vases to the Institution — pieces which Barie described as hammered wood for their pockmarked texture — he also had his work featured on the cover of American Craft magazine’s June/July 2013 issue.

“I wish I could say that I planned that, but it was just a thrill that it coincided,” Barie said.

Barie came across Bauermeister’s work while visiting SOFA Chicago, an art fair dedicated to sculptures and functional art. In the Institution’s off-season, Barie, who’s also an artist, divides her time between working in her studio and traveling around the country to get ideas for next year’s shows.

Sometimes it takes just one thing to trigger an idea for a show. For “Wood: On and Off the Wall,” Barie said she was initially inspired by Kevin O’Toole’s gilded woodwork at Concept Art Gallery in Pittsburgh.

O’Toole lives in Greensburg, Pa., a Pittsburgh suburb, and works with rough lumber and a methodology strongly inspired by geometry.

“I plot everything out very carefully on graph paper beforehand, so I know just where a piece will curve,” O’Toole said.

He used to use metal sheeting to cover some parts of his sculptures because he was interested in the contrast between the metallurgy and the woodwork. But as the wood expanded and contracted, the sheeting would become either a few centimeters too large or too small for the surface area.

“I switched to gilding because it emphasizes the shape of the sculpture more,” O’Toole said. “It expands and contracts with the wood.”

Jesse Walp, an artist based in Buffalo, N.Y., also struggles with the challenges that wood presents. He focuses on sculpting incredibly smooth and organic shapes, sometimes using sandpaper up to 1200 grit, which is very fine, to achieve such a polished look. He references berries, roots and seeds as visual cues in his work.

In “Diverge,” a piece in the wood show that looks like two spheres stretching away from each other, Walp wanted to use a dark red wood he ordered from Africa. But he suspected the order had sat in the sun for too long in a Texas shipyard after it arrived in America. By the time Walp got hold of the wood and started carving, it kept cracking.

“If that wood didn’t work out,” Walp said, “I couldn’t let that stop me from getting that shape out of my head.”

He eventually used basswood to sculpt “Diverge.” Basswood, commonly used to make duck decoys for hunting, is soft and easy to carve. Walp drew the shape of “Diverge” hundreds of times and sculpted it in clay a few times, too.

“With wood, it’s really tough to go back a step,” Walp said, “so you really have to have the form figured out before you start.”

As Walp participates in the VACI exhibit, he looks forward to seeing his work in communication with the other artists’ pieces.

“My works interact well with each other,” Walp said, “and it will be interesting to see how Judy [Barie] has intermingled them with the others. It looks like we all have a lot of dynamism in our work. I can sense the movement in the pieces.”