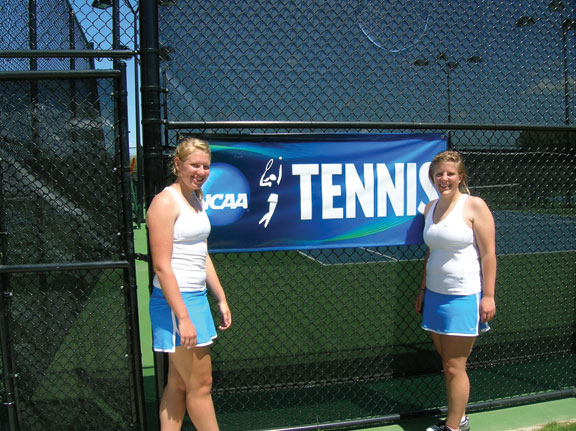 Jenna and Meghan Raynor have played tennis together for the majority of their lives. After playing at Chautauqua Lake Central School, the sisters played at Mercyhurst University in Pennsylvania and have spent several summers working at the Chautauqua Tennis Center. Submitted photo.

Many Chautauquans bring their families to the Institution in the pursuit of lifelong learning and to get away from the stresses of everyday life. People can spend time at the beach, enjoy the morning lectures or stroll along the waterfront during their summer vacations.

Meghan and Jenna Raynor come to the Institution as employees at the Chautauqua Tennis Center to bond with friends and to enjoy the game they love.

Jenna said while some people might get tired of working with their sibling all summer, she cherishes her time at Chautauqua with Meghan.

“She’s my best friend,” Jenna said. “I like working with her and going out to play with her after work.”

Both sisters played tennis and softball together growing up, and they played on the same teams in high school at Chautauqua Lake and in college at Mercyhurst University in Pennsylvania.

Meghan, who is three years older than Jenna, said she was glad to share the experience of being a collegiate athlete with Jenna — even if it was only for a short time.

“I was only with her at Mercyhurst for one year,” Meghan said. “But, I had fun playing on the same team as her again like we did in high school.”

Jenna said her favorite part about coming to Chautauqua each summer is the familiar faces that greet her each season. The center mostly comprises loyal players who play most days of their summer getaway.

“I pretty much know everybody who comes in,” Jenna said. “I have really built relationships from working here for six years. I always look forward to seeing them each year I come back.”

Lee Robinson, program director at the tennis center, said the Raynor sisters have built a solid rapport with the patrons, and they often match up players based on skill level for doubles competitions or for recreational play.

The sisters have also competed in several of the daily doubles round-robin tournaments against the best tennis players at Chautauqua — most of them males.

Director of the tennis center and head pro Paul Young said the Raynors “held their own and then some” in every tournament they competed in.

Young was teaching tennis lessons at the Lakewood YMCA when he met the sisters years ago. He said the decision to bring them to Chautauqua as employees was easy.

However, with Jenna entering her senior year at Mercyhurst and Meghan going through law school in Florida, Young has been forced to think about finding replacements for both of them next season.

“They were both knowledgeable about tennis and were both very strong players,” Young said. “I’m really happy about the decision to hire them, but I think my luck is running out, because they’re going off on their own pursuits. It will be no easy task to replace them.”

Robinson and Young lauded the Raynors as hard-working, personable and intelligent women. Both tennis pros said the center will miss their dedication and customer service skills.

The sisters said the decision to keep coming back to Chautauqua was easy for them because of people like Robinson, Young and the players. They also noted that having a nice place to practice after work was an added perk.

Meghan also touched on the general atmosphere of Chautauqua and described the tennis center as a microcosm of the Institution where intelligent, passionate and sometimes heated debates take place with respect and understanding.

“You’ll see people sitting on the benches at the tennis center having random conversations in the middle of a tennis match,” Meghan said. “They might not be agreeing in a discussion, but then you see them high-fiving each other as doubles partners.”

Undoubtedly, spending countless hours together on and off the court has brewed somewhat of a natural rivalry between the sisters. Meghan only hesitated for a second when asked who she would bet on in a best of three sets tennis match against her younger sister.

“It would go down to the bitter end, that’s for sure,” Meghan said with a laugh. “But, I’d put my money on myself.”