The Chautauqua Symphony Orchestra performs its penultimate concert Saturday evening in the Amphitheater. The CSO closes the 2012 Season with its 21st performance at 8:15 p.m. tonight. Photo by Eric Shea. 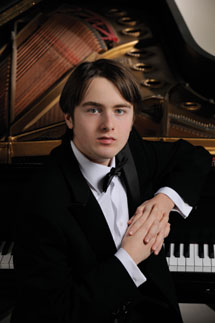 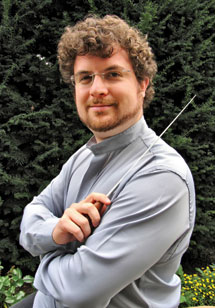 During a safari in South Africa, guest conductor Noam Zur sat helplessly in a Jeep when a rhinoceros came hurtling toward the vehicle. In that moment, he knew the next time he told an orchestra to play dangerously, he would draw on that moment to remember how real danger felt.

The Chautauqua Symphony Orchestra will perform its last concert of the season tonight at 8:15 p.m. in the Amphitheater. The concert will feature Zur conducting and guest pianist Daniil Trifonov performing Chopin’s Piano Concerto No. 2. Trifonov won the Arthur Rubinstein International Piano Master Competition in 2011, the only first-prize winner since Alexander Gavrylyuk in 2005.

Zur and Trifonov worked together last year, performing the same Chopin concerto, which they chose again for tonight because of the CSO’s notoriously fast rehearsal time.

“The less rehearsal time you have, the more you have to pay attention when making the program,” Zur said. “On the other hand, American orchestras are famous for — and especially the festival orchestras — being extremely proficient.”

Zur said that although Trifonov is young, only 21 years old, he has already performed with some of the biggest orchestras and conductors in the industry.

“He’s a young talent, but he knows what he wants, and he’s very specific about it,” Zur said.

Trifonov said Zur is a very attentive and good-spirited conductor, who maintains a great attitude despite the complicated nature of Chopin’s second concerto.

“Music was always around when I was growing up,” Zur said. “I never thought that it would be my profession until I was about 13 or 14. That’s the first time I played in a youth orchestra — funnily enough, in Philadelphia.”

A trombonist at the time, Zur said he would often complain about the conductor in rehearsal and insist he could do the job better.

“At some point, the other colleagues of mine in the section said, ‘Well, either show it, or shut up.’ And I said, ‘OK, I’ll go and study conducting,’ ” Zur said. “And that’s the last answer they were expecting, but the rest is history.”

Trifonov also grew up in a musical family and was exposed to classical music from a young age. When one day his father brought home a synthesizer, Trifonov took to it immediately and began to compose music.

“That is how my parents decided that I should try to study piano,” Trifonov said, “and soon it became an obsession for me.”

“It was quite a challenge for me, having grown up in a totally different culture, to go study in a new country,” Trifonov said. “It became a fantastic experience for me, with constant discoveries and many new goals to reach.”

Trifonov also won the prize for best performer of a Chopin piece in the Arthur Rubinstein Competition, and he said Chopin has long been an essential composer for him. He credits his teachers for giving him a deeper understanding of what he called highly spiritual repertoire.

“This concerto in particular is emotionally complex, with a great range of colors; probably one of the most poetic of Chopin’s works for me,” he said.

The second piano concerto falls in the middle of the concert. It opens with the overture to Die Fledermaus, an operetta by Johann Strauss Jr. Zur said it is a great opener, especially to the last concert of a symphony season.

The concert closes with Mussorgsky’s Pictures at an Exhibition, a well-known staple in the orchestral repertoire arranged by Ravel.

Mussorgsky wrote the piece in memory of his friend and artist Victor Hartmann. After viewing an exhibition of Hartmann’s works after he died, Mussorgsky composed the piece in under six weeks. During the course of 10 movements, Mussorgsky evokes the experience of walking through a gallery of paintings and viewing each one individually.