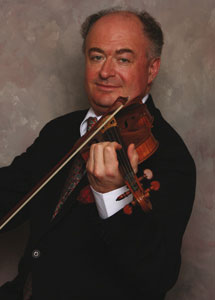 “Summer is a wonderful time to recuperate and to reboot my system,” said Ilya Kaler, a well-traveled and well-versed violinist. “And Chautauqua is the ideal location for that.”

A man who spends his summers on the grounds, and with his wife in the orchestra, Kaler considers Chautauqua to be his second home.

But all rest and no work makes Kaler restless, so he will again teach a violin master class from 2 to 4:30 p.m. today in McKnight Hall.

“I don’t believe in any generic system,” Kaler said about the idea of a teaching approach. “They’re all speculative and promise quick results.”

Kaler teaches at DePaul University’s School of Music in Chicago. And in the fall, he will be teaching a class of 20 students, which is quite an undertaking for one professor.

Born into a Russian orchestral family, Kaler plays the piano and conducts. But the violin is the medium through which he expresses his emotions. To this day, he is the only person to have won gold medals at three major competitions: the Paganini in 1981, the Sibelius in 1985, and the International Tchaikovsky Competition in 1986.

But just like young violinists, he also deals with overcoming the uncomfortable anticipation before a performance.

“I don’t believe in any artists, even the greatest ones, that are completely 100 percent comfortable on stage,” Kaler said, “or they never get nervous.”

“There is always some kind of exhilaration, which is not always pleasant, before you go on stage,” he said. “But I think it’s a good thing, because that allows you to mobilize all your efforts to concentrate.”

Kaler focuses on the importance of conveying a message, with the feeling that an audience will very easily forgive any performer for minor discrepancies that come from the discomfort.

“Performing is like going to a restaurant when you know the chef prepares individually for you a wonderful meal,” he said. “It’s like a souvenir of a real thing, if you give people what they can get on CD or YouTube.”

And Kaler’s classical music does not end there.

“I find the term ‘classical music’ is very confusing and imprecise,” he said. “Classics are kind of a vague term, because it can relate to jazz or any kind of area.”

But Kaler does believe classical music can thrive without major innovation.

“I don’t think there will be any kind of technological changes in the design of violin,” he said. “It’s not like it will have 8 strings, instead of four, or stick shift — I don’t know.”

One thing is certain: the violin and Ilya Kaler are here to stay.