Summer in Chautauqua is filled with sunlight — with an occasional splash of rain. The sound of the fountain in Bestor Plaza and kids ringing their bike bells as they whiz down the street harkens memories of days on the grounds.

Sounds and light conjure specific memories, and on the theater stage, designers subtly manipulate sound and light to create a certain mood, atmosphere or attitude. The way the light and sound changes alters how audiences perceive a scene or character.

“The design elements are supporters of the play,” said Yi-Chung Chen, the lighting fellow for Chautauqua Theater Company. “We are stewards.”

Chen is one of five fellows at CTC, and the four design fellows assist the professional designers on the three major productions and then design the New Play Workshop’s Signature Staged Readings themselves.

Chen and sound fellow Elisheba Ittoop spoke on designing this week’s Signature Staged Reading of Muckrakers, which opens at 8 p.m. Thursday in Bratton Theater and runs through Aug. 4. Muckrakers is a two-person play that discusses how privacy does and doesn’t exist in our digital world, aligning with this week’s theme: “Digital Identity.” 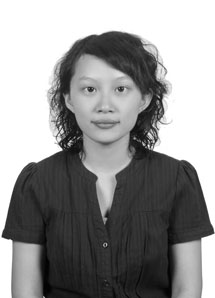 Because the play deals with the idea of privacy, her lighting design for the production will focus on creating a very confined space that reveals every aspect of the territory where the two characters exist, Chen said.

Besides Muckrakers, which she will design by creating the programmed lights for each cue, she spoke about the lighting of the recently closed Fifty Ways.

“The lighting is a very subtle thing. It indicates a passage of time,” Chen said. “We have so many cues, but I don’t think the audiences really know that.”

To Chen, the lighting should be unnoticed by the audience, so that it merely supports the play instead of overshadowing what the actors do on stage.

Chen, who is going into her third year of graduate school at Boston University studying lighting design, is drawn to lighting for its artistic quality.

“Lighting is more abstract and more interesting, for me,” Chen said. While a scenic design is concrete, lighting is more creative, more undefined, she said.

Chen is creatively minded, as she studied piano and flute in high school in Taiwan, but when she saw videos of various plays, musicals and operas, she fell for theater.

“I was so moved and touched by the whole feeling,” she said. Chen chose to study theater.

She completed her undergraduate work in Taiwan before coming to the United States to work with a well-known BU faculty member Mark Stanley, who is resident lighting director for the New York City Ballet.

The BU faculty encouraged her to spend the summer in the U.S. instead of returning home to her family, and she landed in Chautauqua.

She barely sees the grounds, as she spends each day in Bratton Theater or in the production office. Her schedule is particularly rigorous this week — only four days are allotted for rehearsals before Muckrakers opens.

Ittoop, a freelance sound designer and composer while not at Chautauqua, pictures a gritty, urban sound in the background of the technology-driven Muckrakers.

“Whatever I do musically, I want to highlight this lack of privacy. There are eyes looking in on them all of the time,” Ittoop said. “Nothing is secret or sacred. And somehow I will translate that aurally.”

She plans a general scheme in advance, but does most of her work during the rehearsal process, adding sounds and songs as the show progresses.

Each sound effect involves many layers that create a unique feel for that particular show, Ittoop said.

“Sound can be tied to the narrative of the play, it can be one of the characters. Overall, I don’t want sound to overwhelm the actors,” Ittoop said. “The actors and the story — they’re telling takes first priority.

“I think sound can be an emotional highlighter, just going, ‘Look here.’ ”

Sound sets the mood. And while Ittoop takes many of her sound effects from sound libraries of others, she records and manipulates many of her own effects and composes pieces on a small, two-foot keyboard attached to her laptop, she said.

Music has been the constant for Ittoop, who originally studied opera before moving to acting at New York University and finally sound design at the University of North Carolina School of the Arts.

She is now based in Washington, D.C., where she does work for the John F. Kennedy Center for the Performing Arts, though she often moves up and down the East Coast as a sound designer.

“Elvis Costello said, ‘Talking about music is like dancing about architecture,’ ” Ittoop said. “Why talk about it … let’s just do it.”