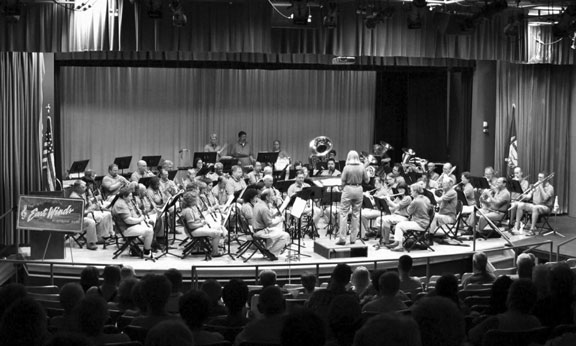 “We have a bit of everything,” said conductor Susan Sands about the East Winds Symphonic Band’s performance “Stepping Out” at 2:30 p.m. Sunday in the Amphitheater.

“We’re stepping out in so many different ways with dances and marches, from ‘The Wizard of Oz’ to ‘Harry Potter,’” she said about the program.

Chautauqua’s own organist Jared Jacobsen will play in the piece.

Sands has spent more than 20 years with a Pittsburgh-area community band, including 17 years as conductor. She was originally an oboist before taking over duties for former conductor James Rossetti, who is now its trumpet section leader.

The East Winds Symphonic Band, which was awarded the John Philip Sousa Foundation’s Sudler Silver Scroll Award for excellence in performing, includes instrumentalists from ages 12 to 89.

“Hazo is very innovative in using little jazz techniques,” Sands said. “We have a full percussion section playing that piece, so there are lots of colors, movements and excitement, as you would expect from the sport. It really does give that feel of bouncing off walls and jumping off rooftops.”

The trip to Chautauqua came together because bassoonist Tom Weiss had fond memories of the place he called “heaven on earth.”

“My wife and I went there for four years running, until she passed away,” Weiss said.

He and his wife would visit the grounds as Buffalo Philharmonic Chorus singers. And Weiss once played in Chautauqua’s Community Band.

“I look forward to coming back, because I haven’t been in six years,” he said.

“Wouldn’t you know, they had a spot opened that worked on our calendar,” Moyta said.

Chautauqua has continued its dedication to providing a platform for groups such as the East Winds Symphonic Band.

“There had been this point where it seemed like community bands were dying out and becoming a white-haired audience crowd,” Sands said. “But that’s definitely not the case for us.”