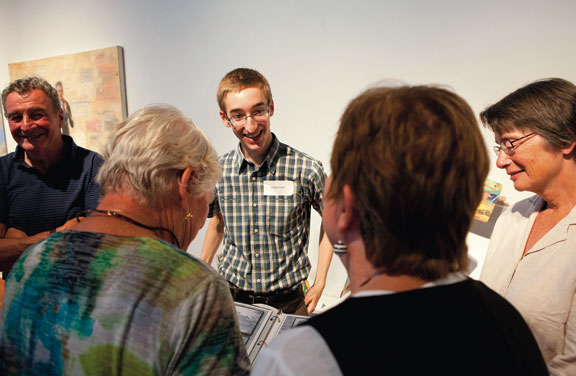 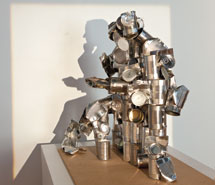 Everett’s “Rachmaninoff” is on display as part of the 55th Annual Chautauqua Contemporary Art Exhibition. The work won the James and Karen Greb Award. Photo by Michelle Kanaar.

Last week, Collin Everett popped into the Strohl Art Center to drop off a drawing and sign a tax form. Instead, he found himself before a mob of fans.

A man shook his hand, telling him how much he loved the tin-can Rachmaninoff sculpture. A woman pointed from across the Strohl, standing with her children near the shadow of “Mr. Anderson Rebuilt.”

You may have heard of him: 18-year-old Everett, who just graduated as salutatorian from Falconer High School, in Falconer, N.Y., had two pieces accepted into the 55th Annual Chautauqua Contemporary Art Exhibition, and “Rachmaninoff” won the James and Karen Greb Award.

The competition was entirely anonymous, and Everett’s work was chosen out of the thousands of entries from artists nationwide. Everett has been making his shadow sculptures for two years now, but he began in another area of the arts.

“I started taking piano lessons when I’d just turned 5 years old,” Everett said. “I think that probably was what got me into art — that artistic mind.”

Since his art teacher and a book he found about Shigeo Fukuda inspired him to create his sculptures in his junior year of high school, he has made five shadow pieces.

Everett started with a self-portrait made of corks, using a spotlight borrowed from his school’s auditorium that burned so brightly he had to turn it off periodically to stop it from smoking and smelling.

After his first sculpture’s success, Everett wanted to do another for his end-of-year project. A friend who sat next to him in calculus was Mary Strand.

“She said, ‘Why don’t you do a sculpture of me?’ and she was kidding, but I said I would,” Everett said.

“Mary Strand” was his second shadow sculpture, followed by a project he undertook during the summer between his junior and senior years. It was modeled after his calculus teacher, Mr. Anderson, a Green Bay Packers fan.

The sculpture, which was on display in the Strohl and has just sold, contains Packers memorabilia including the cheese hat favored by Wisconsin fans. When Everett finished, he set it up in the school auditorium to show his friends — and met disaster.

“I put the light on, and it was ready to show people, and then the next day I came in and it was just collapsed,” he said.

The cheese hat in the center of the sculpture proved too unstable to support the rest of the work, so Everett had to disassemble and remake the sculpture.

“They really stuck together, so it was just tearing — your fingers were really raw afterwards,” he said. “We spent hours pulling apart what I spent hours putting together.”

Everett did remake the sculpture, now called “Mr. Anderson Rebuilt,” in time to be asked to put together a show at the Wright Gallery in the Chautauqua County Arts Council Building. It was the first solo show given by a high wschool student in the space. He called it “Portraits in Shadow.”

Everett had three works by then, but he wanted to have five for the opening. In the months leading up to the show, he put aside one period each school day to go to the art room and work on his next sculpture, a life-size portrait of his younger sister that includes 16 pairs of her old ballet pointe shoes.

After finishing “Lydia” just weeks before the show, Everett wanted one more sculpture. “Rachmaninoff” was created in just two days, working with recycled tin cans and a glue gun.

“I built that sculpture, and after I saw the finished thing, it was amazing to me how it was possible, because it’s hard to think how something like that can transform,” he said.

The tin cans contrast with the tidy and detailed image of the composer on the wall, intended to comment on the smoothness of Rachmaninoff’s music.

With his first solo show at 17, his first juried art competition win at 18, and a senior piano recital just three days before the Strohl opening celebration, Everett is hitting all the right notes. He will start at Miami University in Ohio this fall with scholarships for music and academics and plans to pursue a dual degree in architecture and piano performance.

Everett is eager to attend the School of Music piano performances this summer and the Chautauqua Symphony Orchestra’s upcoming performance of Piano Concerto No. 1 by Rachmaninoff.