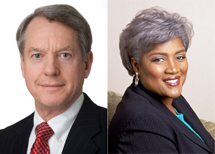 In continuing this week’s theme, “The Lehrer Report: What Informed Voters Need to Know,” GOP pollster and strategist Whit Ayres and Democratic strategist Donna Brazile will join Jim Lehrer at 10:45 a.m. today in the Amphitheater.

“Long-term forces are at work in this presidential election,” Ayres said about the upcoming showdown between incumbent President Barack Obama and Republican candidate Mitt Romney.

The major variables include the economy, the nation’s satisfaction with the country’s direction, world affairs and the job market.

Furthermore, he said, the economy and job creation are the two major hurdles for President Obama as November inches closer.

Republican Reagan ended up winning that fall with a record 525 of 538 electoral votes. Ayres added that shortly before Reagan’s landslide victory, Reagan’s approval rating had dipped below 50 percent following the 1982 recession.

He concluded that most Americans feel the jobs lost during this administration will not come back, and that the current jobs created are temporary.

But Brazile, the Democratic National Committee’s vice chair of voter registration and participation, said the economy and job creation must be deciphered before being debated.

“Right now, the recession is having a disproportionate impact on those without the skills that employers need in order to come out of the recession,” she said.

Brazile was the first African-American woman to direct a major presidential campaign when she managed Al Gore’s campaign for the 2000 election. She is also founder and managing director of Brazile & Associates LLC, a general consulting, grassroots, advocacy and training firm.

“We have a far different economy than what he had back in 2005, 2007. It’s not driven by the construction sector anymore. It’s more driven by IT and health care,” Brazile said.

Last week, the U.S. Supreme Court upheld the Patient Protection and Affordable Care Act in a 5-4 decision. The decision is a contentious point for many informed voters.

“Before we get into who benefits or who is hurt by the constitutionality of the health care act, we should figure out what are the benefits to ordinary Americans who are trying to figure out how this impacts their bottom line, which are their pocketbook issues,” she said.

For Brazile, today’s discussion represents the universal dialogue taking place throughout the nation.

“I think this is the opportunity for us to talk about the role of government in our lives, the future of our economy, the mood of the country and the choices that voters will face at the ballot box this fall,” she said.