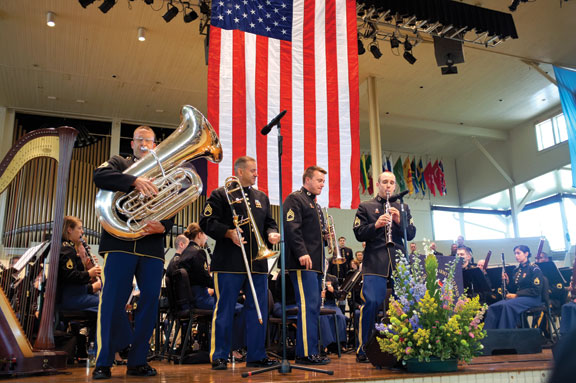 The U.S. Army Field Band and Soldiers’ Chorus perform in the Amphitheater in 2011. Daily file photo

President Teddy Roosevelt described Chautauqua as “the most American thing in America.” The 2012 Season — like the majority of seasons over the last 30 years — will open with one of the most spectacular displays of patriotism in the country.

The U.S. Army Field Band and Soldiers’ Chorus will get the season off to a start 2:30 p.m. Sunday in the Amphitheater.

Maj. Dwayne Milburn, a veteran of more than 20 years, conducts the chorus. He said playing at Chautauqua is a great opportunity for the field band and chorus.

“Chautauqua is a big name in the music community,” Milburn said. “It befits us as a professional music organization to do it. It helps get our name in front of some folks that can guide their students to consider a career in military music.”

The field band and chorus perform anything from jazz, country, soul to Broadway musicals. Milburn said the variety in the field band’s selection is a big selling point to recruiting young musicians to the military.

“If you’re someone who likes to sing and loves all types of music, you’ll have the opportunity to do it on a daily basis and then go out and perform it in public,” he said.

The field band was formed in 1946, while the soldiers’ chorus — its vocal complement — was formed in 1957. Since then, the chorus has played all over the world, in all 50 states and with the elite orchestras in the country, including the Boston Pops, the Cincinnati Pops Orchestra and the Detroit Symphony Orchestra.

The band was initially commissioned for community outreach and the sale of war bonds near the end of World War II. Its wild success earned it the nickname, “The Million Dollar Band.” Milburn said its mission is to tell the story of the Army through music. The band and chorus also aim to garner support for their fellow soldiers in combat while recruiting Americans to volunteer for the armed forces.

Marty Merkley, vice president and director of programming for the Institution, said the field band has only missed the opening of the season a few times during his 22-year tenure. He said the tradition is important to the community, and the few times the band couldn’t make it because of scheduling conflicts, he received letters asking where they were.

Merkley said he no longer has to send an official request to the field band for the opening of the season.

The small-town, patriotic atmosphere, he said, attracts the field band.

Milburn talked about the importance of showing the young musicians at Chautauqua that there is a great career in music awaiting them in the military.

“Very few people can make a real living with a career in pop music. The reality is most people can’t,” Milburn said. “Here, you’re going to be making a living. You’ll be a part of something that I think is really important, which is telling the story of the military.”

Merkley, who has received the Department of the Army Commander’s Award for Public Service from the field band, said that one of the highlights of the show is when the band performs the official song of each military branch.

The field band asks veterans in the Amphitheater to stand during their branch’s song.