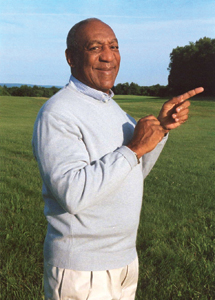 “Can you hold the phone a sec?” Bill Cosby asked for the second time during our phone interview.

Now, a reporter is supposed to be many things — professional, inquisitive, composed — but when I heard the phone click, I got out of my chair and bounced around the room, waving my hands and mouthing the words, “Oh my god, Oh my god! That’s Bill Cosby’s voice coming out of my phone!”

I raced back to my chair when I heard the clicks of the phone as Cosby picked up the line. I took a deep breath as I prepared to ask my next question, but he beat me to the punch.

“I have a 6-year-old grandson,” Cosby said, “who can do the sounds from a Godzilla movie and sound exactly like the soundtrack, and it was getting louder and louder.”

So that’s why he put me on hold. I said I hoped his grandson doesn’t sneak up behind him with that Godzilla noise.

“If he does,” Cosby said, “there’s going to be a limping Godzilla.”

As legendary comedian and storyteller Bill Cosby prepares to return to Chautauqua’s Amphitheater for the fifth time, he reflected on his first impression of the Institution.

“I thought (Chautauqua) was a resort that reminded me of those old black-and-white movies where the wealthy actors and politicians and rich people would come boating, fishing … cocktails … tennis … and speaking the Ivy League English,” he said. “And then I saw the great auditorium, and I thought the acoustics were absolutely fantastic, and I felt like this is very, very cathedral-like. We had a ball.”

Cosby will perform at 5 p.m. and 8:15 p.m. Saturday in the Amphitheater as Chautauqua’s closing act of the season.

Cosby is 74, and his career spans almost 50 years and almost every media outlet. He updates his Twitter and Facebook accounts regularly, which he said is much better than dealing with fan mail, and still keeps an energetic touring schedule.

“Things for me will continue, because my thoughts continue,” Cosby said.

There is comedy, and then there is Cosby. An entertainer and intellectual who surpasses generational, racial and cultural differences to delve at the heart of what makes us laugh, Cosby’s humor speaks of humanity at the best of times and the worst of times. But to figure out what really makes these jokes stick, just consider the timing.

“Comedians,” Cosby said, “regardless of how good they are, will walk out, and it starts right then and there. You can tell. You can feel from the beginning. You are now in the conversation, no matter what you’re doing or how you’re talking. You’re in the conversation with the people.”

Whether the topic is dentists, family life or feeding kids chocolate cake for breakfast, Cosby is constantly gauging the audience. He compared comedy to singing. The two professions both use the voice as an instrument; however, audience reactions and interactions are more immediate and ad-lib for comedians.

Cosby said there are a myriad of questions going through his head as he gives a performance.

“What does a room sound like?” he said. “How robust is the reaction that comes to you? Are you up on it? Are you a little behind? Are you on top with your thoughts? Do you feel comfortable?”

If the audience is enjoying the performance, Cosby said, it might be time to take a few risks.

“This doesn’t come until maybe four minutes in — if you’re really working, four minutes in — whether you trust (the audience) enough to go out on the high wire with no net,” Cosby said, “or do you work with them to stay with the net underneath still giving a great performance?”

In his lifetime, Cosby has seen comedy evolve from well-mannered jeers within conservative subjects to what he now terms “fast food vulgarity.”

Although he pushed the limits and definitions of comedy with NBC’s “The Cosby Show,” the first television sitcom to feature an affluent African-American family, Cosby said he has resisted the cheap laughs and dirty humor that seem to have overrun today’s nightclubs.

Cosby is first and foremost a comedian, with a talent for impeccable delivery and ability to read a crowd, but the work he does behind the scenes is as much a part of that talent as his persona onstage. He said he enjoys his own methods — his writing and his material — and is proud of his stubbornness in not conforming to the contemporary lowbrow comedy trends.

A great deal of Cosby’s humor surrounds the topic of family. Be it the wisdom of Dr. Huxtable or the sales pitch of every kid’s favorite snack, Jell-O, Cosby said he knows where to draw the line and makes sure not to call out specific family members by name.

He also does not believe in trying his jokes out on anyone but his audience, and even then, he is clever to disguise new material. He said family members are the worst, the worst people to judge new material.

“As a matter of fact, I have never enjoyed the thought of going out and trying something out on somebody,” Cosby said. “If there’s something new, and I write it, and I bring it out, I will place it where it will have the support of people laughing and enjoying that part of the performance that came before the new piece.”

So the comedian with nine Grammys, more than a dozen honorary degrees and more albums than he has grandchildren continues, if for no other reason than he loves to make the world laugh.

“I’m in love with what I do,” Cosby said. “I love a laugh; I love the laughter, and my performance gives a feeling of friend and honesty. And I love it when people walk out talking to each other and saying things like, ‘My side hurts. My face hurts. How did he get in my house? I’m not alone.’ I love those things.”