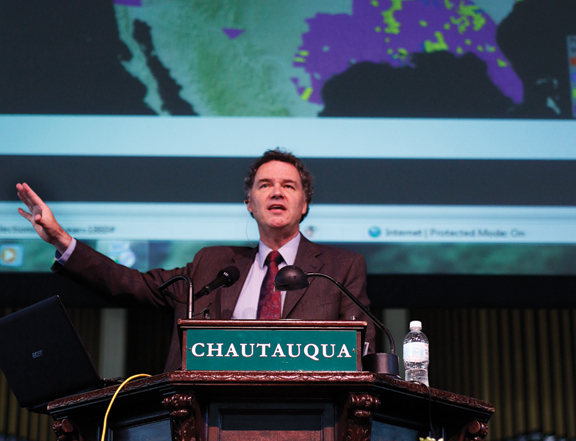 Ed Ayers, historian of the American South and president of the University of Richmond, lectures Wednesday morning in the Amphitheater. Photo by Megan Tan.

“There might seem to be a non sequitur in the title of my lecture, ‘The Logic of Secession,’” Edward Ayers said to open his lecture at 10:45 a.m. Wednesday in the Amphitheater. “How could there actually be a logic of taking the United States apart?”

Ayers’ lecture focused on discerning the logic that led the Southern states to secede. As a historian, Ayers has focused on the history of the South.

“(He is) a renowned historian of the American South,” said Sherra Babcock, director of Chautauqua’s Department of Education. “He makes history more accessible. … We are so pleased that he can be with us this week.”

Ayers has written 10 books on the topic, and he currently serves as the president of the University of Richmond. In this capacity, he has done pioneering work in the field of digital history, creating several online archives of historical data.

Ayers said logic has not played an important enough role in our understanding of the South.

“We think of ‘Gone With the Wind,’ when all those young men can’t wait to impress Scarlett with their bravado and their, ‘Yeehaw, let’s go whoop the Yankees,’” Ayers said. “You don’t see a lot of logic and thinking about what issues are at stake there.”

Ayers said many historians view the Civil War as simply the product of a “blundering generation.” He said this is a far too convenient explanation for a war that led to the devastation of the very place it was designed to protect, the South, and the deaths of more than 620,000 people.

He said the two sides talked over each other frequently, and that there was little genuine dialogue.

“The North and the South dismissed the logic of the other side,” Ayers said. “Reading their newspapers and diaries, one cannot help but be struck by how thoroughly they just talked right past each other. There was no Chautauqua, where people could come together and really listen to what the other side was saying.”

He showed the audience a map of the 1860 election, detailing which counties voted for each of the four parties: Republicans, Democrats, Constitutional Union and Southern Democrat. Ayers said that often, political maps of the time oversimplify the attitudes of the populace. He pointed out that there were many in the South who voted for the Constitutional Union Party, wanting a compromise to stay in the Union, and that 45 percent of the North did not vote for Lincoln.

“What this suggests was that the North and the South were deeply divided,” Ayers said. “It’s this division, this complexity that leads to secession. If it had been clear-cut, we might not have had the same patterns that we had.”

He proposed that there are four categories of logic that led Southerners to decide to leave the Union: economic logic, political logic, racial logic and moral logic.

The economic logic, he said, focused on their control over the production of cotton.

“The South controls — indeed, holds a virtual monopoly over — the most valuable resource in the 19th-century world,” Ayers said. “Cotton is the oil of the 19th century. As its own nation, the Confederacy will become one of the most powerful nations on the face of the earth. It’s already the fourth richest economy in the world by itself, and the products of slave labor in 1860 account for over 80 percent of all American exports.”

Ayers said the secessionists knew that other nations would side with them for economic reasons.

“What will England and France do when confronted with the choice of which side to support: the side that’s producing the raw material that’s driving all of their fancy new factories and railroads and businesses and insurance companies and banks, or the North, which is a competitor?” Ayers asked.

The political logic has much to do with the South’s disapproval of Lincoln, who they saw as a threat to their way of life, Ayers said.

He said the logic of the South was that without the North, it could marry the system of slave labor with the new technology of the modern world, and it would be the South’s duty to export and expand this system to different parts of the world.

“The risk is that the Republican Party will generate more John Browns and William Lloyd Garrisons and Frederick Douglasses,” Ayers said. “If now, for the first time, there is a party explicitly opposed to the expansion of slavery, now what would happen if the president is Republican? A new Confederacy, on the other hand, would be able to put in place a perfect system of racial control.”

The moral logic was about a literal interpretation of the Bible.

He said the North grasped the “imminent logic” of the Bible, where Christ said that all people are created in the image of God, while the South didn’t.

“This is the logic of Confederacy,” Ayers said. “The logic of the universe points toward the creation of the Confederate States of America.”

Q: We have several questions about the study of history, and one is an interesting question about what effect email is going to have on the ability of future historians to uncover historical facts.

A: I’m so glad I’m going to be dead. (Laughter.) Because, you know, on one hand, you find that if we actually had access to the minute-by-minute barometer of our feelings and emotions and reactions that we could have if we surrendered all our claims to privacy to whatever entity out there is gathering all this stuff, then what we’re doing here — the maps you see here cover all of American history from 1840 to the present, and these maps all move. It’s over a billion votes, and when you saw, as mapping The New York Times, it’s over a billion words. That will seem like nothing to the amount of emails that is generated every day. You look back, and I think there is two golden ages in the way history is able to take advantage of the written word. One is the Civil War; we have a good idea of what everybody was thinking every day. The other is World War II, when people were able to write letters to each other, but since then, telephones — not just email, but other things — has eroded the historic record, so you have two choices. One is, all your private hopes and dreams can be analyzed by future people like me, or we have huge blank spots because nobody is writing anything down anymore, and all we’ll have will the op-ed pages of newspapers. I’m so glad I’m dead.

Q: Tell us about those “purple states” out in the far West. What was their logic?

A: It’s surprising. You’ll go back and see California, and these other states are divided, and that’s because people, in many ways, were voting for party rather than anything else, so if you look at this map, you’ll see that they’re purple and red and blue — the states out West; I’m talking about California, Oregon — and what you see is that the Democratic Party had been in power; John C. Breckinridge had been the vice president, and if you were a good Democrat, you’d vote for that, but you could see that the Republicans and Stephen Douglas and the strong Southern rights candidates get that, so that just shows you that the logic is partisan in 1860, because they don’t know they are voting as a plebiscite on the Civil War; they’re voting to — the North says, “If we can be strong enough, then we can do what we need to do.” The South says, “If we can all secede together, we’ll be so strong that the North will have break down,” and as one South Carolinian famously says, “I will gladly drink all the blood that shed as a result of secession.” OK? Because they’re not seceding to have a war, they tell themselves, there’s another part of the logic; they’re seceding to avoid a war, and Virginia does think, If we join in, the largest state of black and white, then the North will have to compromise, and there won’t be a war. So you can see how one step of these things leads to another. … As it turned out, the North and the South ended up being as perfectly balanced as it possibly could to guarantee that the war would endure for as long as possible, so as things turned out, the balance came out so that things, ironically — if the war had not endured so long, we might not have had the end of slavery, because it took a long time for the North to commit itself to a move from union to anti-slavery as the purpose of the war to emancipation, as the purpose of the war. And just in case I forget to say it later, I’m going to say it right now: In Richmond, we’ve been saying something Clement Price was talking about yesterday; we’re not only in the 150th anniversary of the Civil War; we’re in the 150th anniversary of the greatest thing that’s ever happened in this nation, which is the end of perpetual bondage for 4 million people — that’s the logic we don’t fully understand. How did it come to be when the North does not go to war to end slavery in 1860? That does not seem possible. But where is emancipation day in this country? Right? That is what we should be talking about, so that’s the reason, that as a historian of the Civil War, maybe I’ll have another opportunity to come back and talk about how we go from this logic of secession to the logic of emancipation. Because it’s going to take the next four years for it fully to work itself out. I forget what the question was, but that is the answer that I have.