Photos and Story by Megan Tan 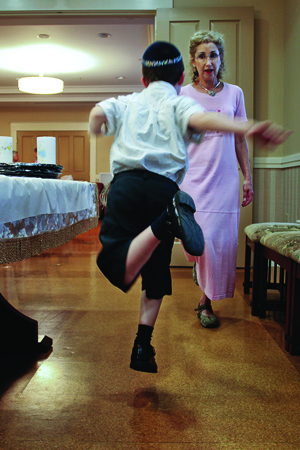 Every morning, 11-year old Mendel Vilenkin wakes up with a kippah on his head. He climbs down from his top bunk, sits next to his bed and pours water over his hands, alternating three times in a ritual washing — known as negel vasser or “nail water” — to begin the day of service to God. Eight-year-old Shmuel also knows the morning rhythm.

“The first thing an observant Jew does when they wake up in the morning is open their eyes and thank God for being alive,” said their father, Rabbi Zalman Vilenkin, a representative — along with his wife, Esther Vilenkin — of the Chabad-Lubavitch movement.

After breakfast, the Vilenkin children often are seen greeting the community as they sell homemade lemonade and hand-stitched bookmarks and bike around as children of Chautauqua.

Mendel was 6 months old when Zalman and Esther first came to Chautauqua 11 seasons ago, and now, their children know nothing less than summers at Chautauqua.

Zalman and Esther have educated their children about why they have chosen to live an observant life and why other families do not.

With the eldest child two years away from becoming a teenager, it is natural for parents to acknowledge the future possibility of rebellion. It’s universal.

According to Zalman, temptations that conflict with observant values are the dominant challenge for religious children.

To preserve the traditions of their family’s history through their six children, Zalman and Esther promote the positive aspects of observant Judaism and provide an environment of exposure, empowerment, education and examples.

Throughout their time at Chautauqua, the Vilenkins have welcomed a variety of nonobservant people into their home, including numerous babysitters who have brought exposure to their children. Some have had piercings and tattoos — actions that are discouraged in Jewish law — and spark the kids’ curiosity about why that person made that choice.

“They are just fascinated with people,” Esther said.

The children also make challah every Friday, engage in blessings with grape juice instead of wine, light Shabbat candles and help set up activities, contributing to traditions with purpose.

In the Vilenkin household, Judaism is reinforced through a “do-as-I-do” parental approach and an emphasis on consistency.

“If we kept kosher in the house, but every time we went out to a restaurant, we would eat non-kosher, I would really create a conflict in the kids’ minds,” Zalman said.

The Judaism laws also empower the Vilenkin children to argue with tradition.

“In general, we’re not scared of questions,” Zalman said. “So if there’s a question, ask. If I don’t know the answer, we’ll look for the answer.”

The Vilenkin children also have developed an intellectual appreciation through studying the written and oral traditions.

In the sixth grade, Mendel studies Hebrew and Yiddish, the Jewish aspects of Scripture, law and philosophy and engages in Judaism debates and discussions.

Intellectual application takes place both in and out of the home.

Esther commonly witnesses debates about divine providence versus free choice among her children as they decide, for example, whether or not to buy an electric scooter at Walmart.

Whether the children are in school, at home or at the store, “this is how they argue,” Esther said. “I’m really happy to see that they absorb what they are taught, internalize it and are able to relate to it. The fact that this is what they are bantering about shows me how much it (Judaism) means to them.”

“It’s not something you have to impose on them,” Zalman added. “They see that it’s a priority, that it’s real; it’s not just in the books.”

As of right now, Zalman said, their six children are too young to show any signs of rebelling against their traditions. But as most parents know, children don’t stay children forever.

The Vilenkins said they are confident in their children’s willpower, strong sense of self and pride in who they are, and Zalman and Esther recognize their fortune and count their blessings.