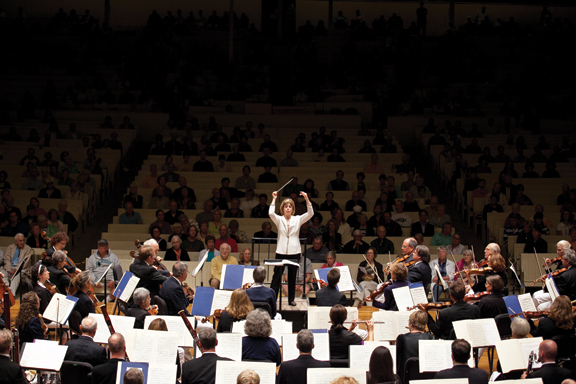 JoAnn Falletta is a tiny woman who nonetheless makes big explicit gestures on the podium. Her stick technique was so clear and precise, her left hand so expressive, her subtle, hip-swaying movements so balletic, that anyone in the 20th row of the Amphitheater Thursday would have known what she was after.

Surprise is nice, but as fans of caper movies and military commanders know, there is something satisfying and periodically thrilling about witnessing a well-known plan being executed to perfection. So it was Thursday’s Chautauqua Symphony Orchestra’s program of 20th century music that began in Spain and ended in postwar Soviet Russia.

Falletta, the music director of the Buffalo Philharmonic Orchestra since 1999, was a classical guitarist, so one assumes that she has been steeped in Spanish music. Joaquin Turína, whose three “Danzas fantásticas” opened the program, was a Spaniard who was trained in Paris and absorbed the musical language of Debussy and Ravel. Some conductors emphasize this lineage, turning the 1919 suite into an extension of Ravel’s “Rapsodie Espagnole.”

But there is more than one way to play this music, and Falletta eschewed Impressionist pastels for the sunlit primary colors of Spain. It was a rhythmically insistent and extrovert performance that was perhaps short on atmospherics but long on excitement with the big climaxes registering with appropriate force.

Joaquín Rodrigo’s “Fantasia para un gentilhombre” is a different animal. Written in 1954 for the peerless guitarist Andrés Segovia, it is a pastiche on 17th century themes by Spanish composer Gaspar Sanz. By necessity, it is delicate, scaled to let the quiet voice of the classical guitar be heard. Falletta presumably knows this version quite well, but what we heard was James Galway’s arrangement for flute, a somewhat more extrovert instrument, and certainly so in Galway’s hands.

Richard Sherman, the CSO’s principal, played it for the first time last night and did a creditable job. He and Falletta navigated a middle course between the courtly (or is it gentlemanly?) elegance of Rodrigo’s original conception and the bravura showmanship of Galway’s recording. The CSO hadn’t played it in some years, and that perhaps accounted for the rough ensemble moment here and there, but this was an entertaining trifle nicely brought off.

Prokofiev’s Fifth Symphony is no trifle, but it’s a difficult work to get a handle on. An article for The New York Times years ago provocatively posed the question: Is Prokofiev the best second-rate composer of the 20th Century? He’s always seemed so to me.

Prokofiev was a cosmopolitan who nonetheless returned to the Soviet Union after a period of exile, ending his career by writing in the vaguely nationalist style mandated by the Stalinist sensibilities of the time. His non-dramatic orchestral works can be fantastically well-made and dazzlingly orchestrated, but placed next to the tragic sweep and soul-baring emotion of his near-contemporary and rival Shostakovich, Prokofiev falls short on gravitas. He bears roughly the same relationship to Shostakovich as Richard Strauss does to Mahler.

Falletta didn’t do much to change my estimation of the composer, but if we’re to have emotionally blank music, by all means, let’s have it served up with the energy, bold plotting and razor-sharp playing that Falletta summoned from the CSO.

This was very exciting musicmaking with generally fast (and in the sardonic Allegro marcato movement, very fast) tempos that asked a lot of the CSO players. They delivered and then some, with the big climaxes — and there are a lot of them — landing with crushing sonic force.

It wasn’t all show. In Falletta’s hands, the slow movement approached a level of eloquence I find rare in this composer’s work. At the end of the whiplash finale, the crown leapt to its feet. It was a response that Falletta surely intended, and it was richly deserved.