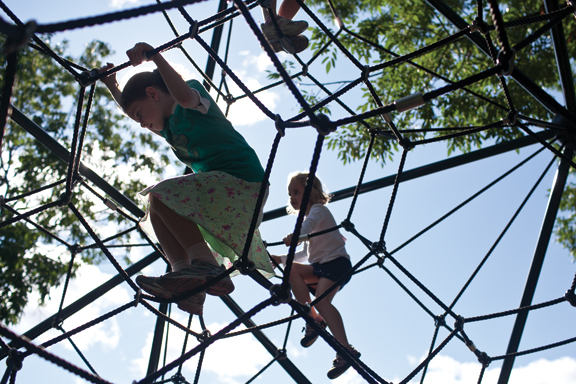 Students from Children’s School Group One play on the Prendergast Playground Thursday. Photo by Eve Edelheit.

Just down the hill from Turner Community Center, only a few feet away from courts seven and eight at Chautauqua Tennis Center, two small paths jut out from a shaggy hedgerow. Next to path on the left, the words “Play up! Play up! And play the game!” leap forth from an old plaque attached to a large rock.

The paths lead to an open area with a woodchip floor among the trees. A complex steel structure comprises most of the space, with webs of black cables held together by steel bindings and forest-green supports in the ground. Large tree trunks surround it, their bodies shooting skyward; branches poke out on the way up, decorated with bright green leaves.

This is Prendergast Playground: a children’s play space built around a natural area to encourage self-discovery.

Jack Voelker, director of recreation and youth services, said the playground’s setting among the trees sets it away from busy areas of the Institution, allowing kids to discover it for themselves.

“We were looking to use a play space that drew kids into a natural environment, not a typical playground environment which is, typically, almost always right out in the open, sort of devoid of anything natural around it,” Voelker said.

The idea for a pastoral playground setting came to Voelker about 15 years ago, he said, but he ran into immediate challenges while thinking the concept through.

It took attending a recreation conference in Syracuse for Voelker to see how his idea could be realized here at Chautauqua.

Among the vendors there, Voelker said he saw a small-scale model of a structure made of cable and steel and knew that he could use something like that to bring his vision to life.

“I said, ‘That’s what I’ve been looking for — something that has a lot of play value,’” he said. “You can get a lot of kids creatively using it, because no one uses that structure exactly the same.”

The uniqueness of Prendergast Playground comes from the collaboration between Voelker and the innovative playground developer Goric Marketing Group USA, Inc. Voelker said he communicated his ideas to Goric workers, who told him how those plans would work with the pieces of equipment they could utilize.

“It became fairly customized within their ability to create these structures, because they had lots of options,” Voelker said. “This company … was willing to work with me on saying, ‘OK, this won’t be anything you’ll find in the catalog.’”

Even the color of the structures’ metal support posts was created specifically for the playground, Voelker said. Their catalog now features that color, a dark evergreen.

Once Voelker laid out the plans with Goric, he found a great spot for the playground: the land surrounding the recently purchased Turner Community Center. The spot Voelker chose required minimal clearing out to make room for the playground, which is why, he said, it was the ideal space.

When the playground opened in 2004, Voelker said it was met with two criticisms. The first, he said, addressed the generally unkempt look of the surrounding wooded area. The second lamented that the playground is hidden.

Both of these complaints miss the point, Voelker said.

“Nature is messy, and that’s OK,” he said. “Certainly, it’s not messy with garbage. People keep it quite well cleaned up, but it isn’t manicured. It’s not intended to be. It’s intended to be a quiet space and a discovery space, and when kids discover it, that’s what makes it special.”

Kelsey Neckers discovered the space through the guidance of the 13-year-old named Ann whom she babysits. Nearly every morning, Neckers, 17, sits under a tree and reads, while Ann explores the playground.

“She likes the spider-web thing,” Neckers said. “I don’t really know what it is.”

Voelker said that’s the whole point of the playground.

“That’s part of the reason why I like it, because everyone who discovers it plays on it in a different way,” he said.

One sunny Thursday afternoon, two young children competed against each other to see who could climb through the tangled web of cables faster. Their mother sat on one of the tree-stump seats near the edge of the playground area, timing them.

The older child crossed the cable bridge, wiggled through the net portion jutting out from the side of the large structure and put his hands out to touch the playground’s cable hammock, the competition’s endpoint.

A row of bicycles decorated the shaggy entrance paths to the playground — a still, quiet scene. The only sounds were the occasional rustle of leaves in the passing breeze, the soft pop of a tennis ball against a racket from the nearby courts and a few gentle bird chirps.

Pictures of birds in the area can be found on a yellow sign at the foot of the playground, complete with brief descriptions of Black-capped Chickadees, White-breasted Nuthatches, Downy Woodpeckers and more.

Voelker said the graphic was added to enhance a playground visitor’s overall awareness of nature while there. That, he said, is the real purpose the playground serves.

Now, seven years into its existence, Prendergast Playground still stands just behind the hedgerow, tucked back in its own world, inviting visitors to come inside and discover nature — and themselves.

“It becomes an invitation to walk through those natural doorways into what is a beautiful little grove, and in that grove, we created this challenging play space that isn’t just another play space. It really invites kids further into that environment,” Voelker said. “It’s a personal discovery, and the playground is simply there to help that happen.”