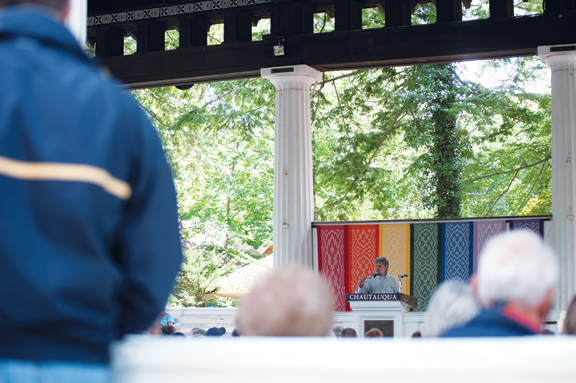 A full house watches Joerg Rieger on Wednesday, during the third of five Interfaith Lectures he and Crossan will give during Week Seven. Photo by Ellie Haugsby.

“So what if this Jesus that (John Dominic) Crossan is talking about, that I am starting to talk about here, is really taking us to the core of reality? What would be the implications for politics and economics, the way we live together?” Joerg Rieger asked.

Authors and theologians Crossan and Rieger returned to the Hall of Philosophy platform at 2 p.m. Wednesday to continue their afternoon lecture series, “The Heart and Soul of Money.”

Crossan briefly reviewed his axis of justice and power, explaining that these two axes result in four quadrants. He asked the audience members to ponder where they located Jesus Christ in the quadrants. He also encouraged the audience not to shy away from questions and not to confuse curiosity with doubt.

He asked, “Where did the Biblical tradition … ever come up with such an absurd idea that God has anything to do with nonviolence or distributive justice? Are we imposing some kind communism, socialism or that unspeakable term, liberalism, back on the first century that never dreamed that way?”

The Israelites, he concluded, came to terms with the idea of a God of distributive justice from the concept of a well-run household. God is the house holder of the world-house and the home-maker of the earth-home, Crossan said, and served as the Israelites’ example.

He launched into a discussion of the historical Jesus — “the person who lived in a certain time and place in this world” — and his method of praying. The Lord’s Prayer begins with “Our Father,” and Jesus uses the Aramaic term “Abba,” a familiar, “inside-the-family” salutation, to address God.

Crossan agreed that both terms — the formal “father” and the informal “Abba” — are patriarchal in nature, but he urged his audience to remember the context in which Jesus prayed. Householders were typically male, he said, but in the first century, wives typically outlived their husbands and ended up managing the household.

“With complete integrity, then, translate ‘father’ in your mind into ‘householder,’” Crossan said.

Jesus exemplified the attitude he wanted his followers to model in that he wanted them to address God and take responsibility as though they were a part of the family, Crossan said.

The Lord’s Prayer transitions from imagery of the household of God to imagery of the kingdom of God, and Crossan put this, too, in the context of the historical Jesus.

Jesus chose the term “kingdom” specifically to attract the attention of the Romans, Crossan said, and the Romans jumped to the conclusion that Jesus referred to their own empire when he said “kingdom of God.” Upon closer examination, however, the kingdom Jesus described did not match the Romans’ kingdom.

“What’s at issue here is not rule as place — this little region — but rule as style,” Crossan said. “The proper translation of ‘kingdom of God,’ the exact translation, would be ‘the ruling style of God.’”

Crossan shifted to the death of Jesus and his relationship with Pontius Pilate.

“Pilate got it exactly right. Pilate understood exactly what Jesus was about,” Crossan said. “He knew that when Jesus said ‘the kingdom of God,’ he was talking against Rome.”

Pilate crucified Jesus — sacrificing time, supplies and soldiers — as a warning to others who might want to follow his example, Crossan explained. This reaction proves Jesus was not simply a nuisance.

“Pilate is the greatest witness in the New Testament to the nonviolent, revolutionary nature of Jesus’ life and message,” he said.

But Pilate didn’t try to gather Jesus’ followers and kill them, too. Though Jesus was a threat to Roman rule, his followers weren’t; they were not violent because Jesus was not violent.

In the Gospel of Mark, Mark contrasts the experience of Barabbas, a violent Jewish freedom fighter imprisoned along with his companions, with that of Jesus — “the true bar-abbas, the son of the Father,” Crossan said — who was in prison, but not with his followers.

In the conversation John imagines between Pilate and Jesus, Jesus tells Pilate, “My kingdom is not of this world.”

If Jesus’ kingdom were based on earthly standards of power, Jesus’ companions would have fought to have him freed, Crossan explained. But Jesus’ power was not based on coercion, unlike the Roman Empire’s.

He reiterated his earlier question about where Jesus falls on the quadrants of power and justice.

Crossan emphasized that he was speaking from a Christain, not a historical, perspective.

This is not an attack of the validity of the Bible, Crossan emphasized.

“We have a story whose meaning is in the middle,” he said. “That’s why we count time down to Jesus and up to Jesus.”

Crossan concluded by describing the Eastern Christian image of the pantocrator, or all-powerful, God. In this image, Jesus may hold a text large enough for the viewer to read. The words, usually, are ones spoken by Jesus himself. But Jesus himself is never reading the book.

Rieger offered the scenario of an older sibling beating a younger sibling and a parent stepping in to stop the fight and perhaps punish the older child.

These are more than good ideas, he said.

“I’m talking about alternatives that are living parts of the Christian tradition,” he said, including alternatives of power and alternative movements.

Alternative Christianity played a significant role in the history of the United States. The tradition of progressive Christianity supported the women’s movement from its earliest inception. Martin Luther King Jr., a pastor, led the civil rights movement of the 1960s.

Progressive religious traditions allied themselves with labor movements as well; Rieger offered the examples of Christian socialist camp meetings in Texas and Oklahoma a century ago.

Mainline religion, as well as mainline economics and politics, seek to convince their subscribers that there is no alternative to what they offer. Empire, the theme of Rieger’s lecture, attempts the same.

Empire seeks to control all spheres of life, Rieger said. Wealth and power are concentrated from the top down and in the hands of a few, and solutions to any problems are expected to come from the top.

Empires have surrounded Christianity since its origin, and Rieger said it has had to contend with violent power as well as “soft forms” of control, often perpetuated by facets of the economy.

“(These soft forms) are often more dangerous because they are less visible,” Rieger said.

The Emperor Constantine attempted to domesticate Christianity, for example.

When Constantine called the Council of Nicea to determine the status of Jesus’ divinity, one camp thought Jesus and God were of equal spiritual status and another school of thought believed the two were separate in power.

Supporting Jesus’ status as equal to God was Constantine’s attempt to tame Christianity, Riger said. By placing him at the top of the spiritual hierarchy, Constantine sought to make Jesus a representative of top-down power.

“Perhaps empire Christianity itself could provide an alternative,” Rieger said.

He suggested that Jesus Christ’s equal status with God also could represent a bottom-up approach to Christianity.

“What if you read God in the light of who Jesus was?” he asked.

Constantine eventually must have realized the illogicality of his approach; Rieger explained that by the end of his life, Constantine reverted to Arianism, which sets Jesus below God on the spiritual hierarchy.

What made Jesus dangerous, Rieger said, was that he not only talked dangerously but organized, too. He consistently rejected the temptation of top-down power. When Satan tempted Jesus in the desert, Jesus rejected his advances not because he would receive spiritual rewards later but because divine power as a whole denies the validity of the top-down approach. Demonic power, rather than divine power, is top-down, Rieger said.