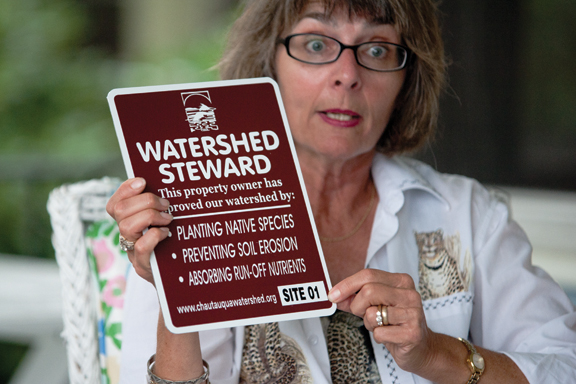 Conservationist Jane Conroe displays the placard designating the Rappole residence on North Lake Drive as the first Chautauqua residence to be honored as a watershed steward site. The Rappole family has encouraged development of buffer zones which protect Chautauqua Lake from the contaminants contained in rainwater runoff. Photo by Ellie Haugsby.

“I’m passionate about our Chautauqua Lake,” she said, with emphasis. “The lake is in danger. The problem is the sum of an enormous number of small things that have been done during the past 100 years of development along the lakeshore and in the lake’s watershed.”

Now a 30-year resident of Chautauqua County, this Cleveland native taught high school science for 25 years in the county school system, developing an environmental science program in the process. Conroe has also been active in environmental matters, serving for several years as a vice president of the Chautauqua Watershed Conservancy. Her husband, Doug, serves as the Institution’s director of Operations.

“Now I have a platform to do what I love most,” she said.

That platform affords her a part-time paid position as a virtual apostle for cleaning up Chautauqua Lake — one convert at a time.

Establishment of Conroe’s position was one of the prescriptions of the 2010 Chautauqua Lake Watershed Management Plan, a report produced as the result of the active collaboration of several different groups with stakes in the lake and its future, ranging from the Chautauqua County Visitors’ Bureau to the Sportsmen’s Association.

Conroe and her colleague Deb Naylor, an environmentalist, geographer and engineer with extensive experience overseas, are essentially splitting a full-time position for two years. They began last month.

Naylor has so far “operated mostly behind the scenes. I try to focus on the big picture, preparing literature for circulation and meeting with county planning officials and larger landowners,” she said. “I’m now hard at work on a large project to map the entire lake watershed. This should give us the overview we need to identify sources of lake degradation.”

“I love this division of labor,” Conroe enthuses. “Deb can handle the macro issues. That leaves me to proselytize property owners.

“Let me tell you about the other day. A group of property owners across the lake from the Institution heard about my mission and invited me to speak with them. Their shoreline had been eroded by last winter’s storms and the floods of this spring, and they were divided about how to protect and nurture the shore,” she recalled.

“Some residents said, ‘Get rid of those weeds.’ Others felt the weeds actually facilitated the natural process of rebuilding and revitalizing the shoreline. We talked for a while, animatedly at times. When I left, I had convinced them that letting the weeds do their work was best. I felt that we had saved a bit of the lake shore, and it doesn’t get any better than that for me.”

“Last week,” she continued, “a property owner from near Lakewood called me. He was dismayed that a creek, which crosses his property, had eroded its bed over the years, to the point that he can no longer walk across it. I think the spring floods got his attention, too.

“He hadn’t really focused on the causes of his creekbed erosion. I was able to point to recent development activity not close to his property but in the creek’s watershed. With heavy rains, paved and lawned areas pour water directly into the creek and that further scours out the bed.”

Recently a group of concerned north Lake Drive Chautauquans invited Conroe to address them on lake preservation issues, and a lively conversation broke out.

Included in the group was Rosemary Rappole, a passionate advocate for the environment who has been instrumental in setting up this season’s popular Lakefront Walk series organized by the Bird, Tree & Garden Club with assistance from the Chautauqua Watershed Conservancy.

“A position like Jane’s is long overdue,” Rappole said. “We all share in the lake. It’s a view, a playground, the source of our drinking water, an economic engine in its appeal to visitors. It’s a big part of our identity here at Chautauqua. We’re all pleased that Jane is spreading the word.”

Also attending the informal gathering was former Bird, Tree & Garden Club president Alan Nelson. He recalled a backyard habitat program extensively supported several years ago by his club. “We thought we had a good idea, we had good materials to support its implementation, and we anticipated lots of participation. A total of six families signed up.”

Nelson hopes Conroe’s outreach will inspire many more to do what they can to protect the lake. “Lakeshore property owners can have the most obvious influence, but individuals who live away from the lake can also make significant contributions by doing what they can to retain rainwater that falls on their property,” he said.

“When people ask, ‘What do I plant? What do I do? Where do I start?’” Conroe added, “I’ll have some answers for them.”

A surprise was in store for the Rappoles. Conroe brought along with her the first watershed steward designation, which will be a hallmark of her outreach. The placard, proclaiming the Rappole home as Chautauqua’s first designated site, will be proudly displayed in their yard.

“It will recognize their management of the lakeshore below their house,” Conroe said. “There are two separate buffer zones full of native vegetation, which will do wonders to protect that part of the lake shore.”

While Conroe is making her house calls, the Chautauqua Watershed Conservancy is pressing ahead to raise necessary funds to complete purchase of a stretch of Chautauqua Lake wilderness shoreline just off Route 394, north of Stow. The so-called Wells Bay Lakeshore Forest would add 3.5 acres and 210 feet of shoreline to the growing inventory of preserved lake shore, close to Sandy Bottom, a site favored by pleasure boaters on the lake.

“We’re getting close to our target of raising the last $80,000 to conserve Wells Bay,” Conservancy executive director John Jablonski said. A recent public tour of the site should help raise the needed money.

The outreach of Conroe and Naylor is supported by a grant from the Ralph C. Sheldon Foundation of Jamestown and New York State funds. The grant is administered by the Chautauqua Watershed Conservancy.

Chautauquans who would like a home visit or consultation with Conroe can reach her at conroejane68@gmail.com or at 716-664-2166.