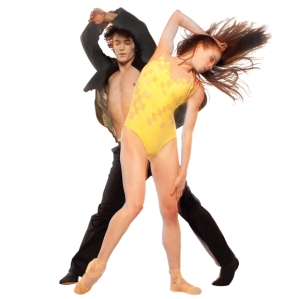 North Carolina Dance Theatre in residence with Chautauqua Dance presents “Dance Innovations,” an evening of pioneering and mostly modern choreography. The performance begins at 8:15 p.m. tonight in the Amphitheater.

“Zokusuru,” meaning “to belong to,” is about a young Japanese girl who is married off despite her wishes. Two dancers symbolizing two spirits move around her, whispering in her ear as she contemplates her options.

One spirit represents her obligation to her husband, while the other represents her independence. The energy of the ballet, which is set to Japanese drumming, builds as it moves forward before reaching a dramatic surprise ending. The company performed this piece at the beginning of the summer for the intimate salon evening.

Sasha Janes, rehearsal director and guest choreographer, made two pieces featured this evening, which were both part of a “green” program he and Diamond did two summers ago.

“Tree Hugger” is a story about a California activist, a woman who, with hopes of saving a redwood tree from its demise, decided to live among its branches for roughly two years.

The dance is a trio set to music by Maurice Ravel, Janes said. At the beginning of the piece, the woman runs and jumps into the redwood, which is represented by the two men. She then is kept off the floor for the entirety of the dance.

NCDT member Traci Gilchrest is staging a piece titled “Requiem,” which will follow Janes’ piece. The “Requiem” choreography is by Jacqulyn Buglisi, a Martha Graham-influenced choreographer who now is with her own company. This contemporary piece is based on the events of 9/11.

Gilchrest said the audience will see themes and images from what happened that day throughout the piece, which she described as having “minimum” movement.

“It’s just all very grounded, very earthy movement but still very beautiful,” she said, adding that the five women in the dance will be barefoot throughout.

Janes’ “Kinetic Energy” is next. He said the original idea for this piece came when he decided to choreograph a dance to the simple rhythm of a treadmill.

“The treadmill is sort of symbolic as being the energy source for the dancer,” he said.

The final dance will be Dwight Rhoden’s “Spill.” Rhoden is the company’s resident choreographer. Gilchrest staged this piece, which the company did in part at the July 27 performance.

Rhoden’s company, Complexions Contemporary Ballet, first danced this piece last year, and Gilchrest said this will be the second time “Spill” is performed in
its entirety.

The idea for the dance came from the impact of the oil spills on animal and life forms. The choreography represents the struggle of the wildlife during that time. Much of the motion is related both to the waves and to the animals.

“You’ll see a lot of desperate movements, a lot of out of control movements,” Gilchrest said of the closing dance.