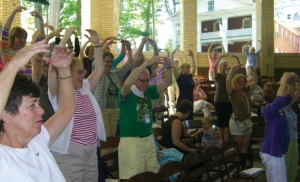 Members of the audience participate in last season’s “Twenty Ballet Steps that Everyone Should Know,” hosted by the Chautauqua Dance Circle. Submitted photo.

Mimi Eddleman and Maris Battaglia have been in the ballet world for years.

Eddleman, founding co-president of the Chautauqua Dance Circle, still takes classes in New Jersey. Battaglia, member of the CDC and frequent guest speaker, has taught the Workshop dancers at Chautauqua Dance for 22 years.

The two will merge their knowledge of ballet at 3:30 p.m. today in Smith Wilkes Hall in a lecture titled “20 Ballet Steps that Everyone Should Know.”

“They’ll learn the basic steps so that when they do see the ballet, they’ll have a better understanding of it,” she said.

The CDC has hosted this lecture in seasons past. Battaglia said almost 150 people attended last summer’s session. They stood in the aisles and did the moves in their seats. The presentation’s popularity prompted the CDC to host the lecture again.

Eddleman and Battaglia themed the steps “Pas de Dance,” a play on the many movements that involve “pas” and “de.” Battaglia said she will bring a barre for attendees to use and a few dancers to demonstrate the technique.

Eddleman, who also will assist in demonstrating, said ballet is much more involved than most people think.

“People who have not studied ballet and who are not aware of the difficulty and involvement will realize that when you take a simple step, such as a tendu, for instance, you have to involve the entire body,” she said.

It’s all about dance appreciation. Both Eddleman and Battaglia said an educated audience is a better audience. You can appreciate the craft more when you’ve experienced it yourself.

Their familiarity with ballet stems from years of studying and instructing.

Eddleman, who takes an adult class at the New Jersey Ballet, said age should never stop a dancer from dancing. She still appreciates both the physicality of the movement and the mental stimulation.

“Once you’ve been bitten by the ballet bug … you just don’t lose it,” Eddleman said, adding that she does both exercises at the barre and a few center combinations.

And Battaglia was the first dancer from Western New York to study at the School of American Ballet, though she never danced professionally. She said she took over her cousin’s small studio years ago, which grew under her instruction.

Jean-Pierre Bonnefoux, artistic director of Chautauqua Dance, invited Battaglia to come teach the Workshop students at Chautauqua when she was 49 years old; she also helped to establish the CDC by expressing to others the importance of a supportive guild at a dance school.

“They all have something a little different to offer,” Battaglia said of the CDC members.

The CDC hosts free, weekly lectures throughout the season as well as pre-performance lectures for better insight into performance choreography.