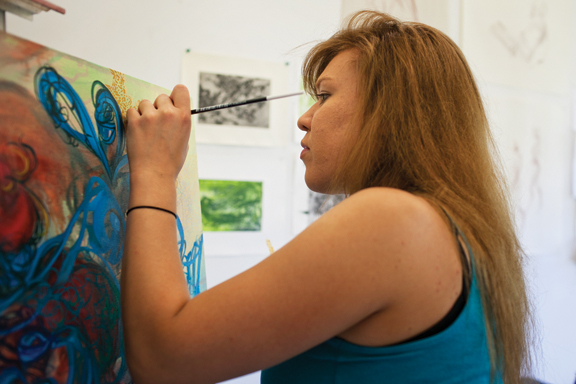 Making art is a struggle.

That’s a lesson Lisa Jakab has learned in her two summers as a School of Art student at Chautauqua. Last summer, Jakab’s first at the Institution, she had an inspiration the first day and ran with it. But this summer, she didn’t get so lucky.

She suffered from a bout of artist’s block and sat down with Artistic Director Don Kimes to talk about it. He told her that if making art seemed easy, it probably meant the art wasn’t that great. You have to struggle through it, he told her, and that’s when you find something that’s really good.

So Jakab kept plugging along, spending days and nights exploring color and form in her studio at the art school. But even when she wasn’t sure of the direction in which she wanted to push her ideas, she knew she’d figure it all out eventually.

That’s part of the reason Jakab first decided to come to Chautauqua. She had heard about the School of Art from a friend and, after graduating from Alfred University with a degree in fine art in 2009, decided to apply. She had such a successful summer last year that she returned for a second run.

“All you have to do is make art and talk about art, and they give you food and a place to sleep,” she said. “What more could you ask for?”

Jakab doesn’t need much else to get by. She works primarily as a painter and printmaker, having first tried printmaking at Chautauqua last summer. She said she loves having her own studio and the sense of community that exists among the student artists. She and her peers constantly walk through each others’ studios and critique the work hanging in them. And when someone needs help figuring out the lighting or logistics of a piece, there are no qualms about grabbing whoever’s around and asking for help.

“We’re always asking each other questions, and we can sit down and talk about art all night,” she said. “Everyone’s really interested in what everyone else is working on, and conversations happen naturally. It’s not like we’re forcing a critique.”

Jakab said the structure of the art program lends itself to that natural, easy dialogue about art. She said she feels students can customize their summer to get what they want out of the program, experimenting with mediums they think they might like or meeting with professors they admire. But they’re not left entirely to their own devices — when Jakab was unsure what path to pursue after finishing her undergraduate degree, she sought advice from the artists and faculty at the School of Art.

“Undergrad didn’t really prep me, and I wasn’t sure where to go or what to do,” she said.

She eventually decided to enroll to graduate school this fall at American University, where Kimes is a professor.

“It’s great when you can really connect with a teacher,” Jakab said. “I’ll feel good knowing we’re already on the same wavelength.”

The community in the art school is a big plus for art student Dan Figliozzi as well. Figliozzi, another Alfred University alumnus, attended a lecture by Kimes at school his junior year, during which Kimes mentioned Chautauqua. He said he remembers turning to his friend and saying, “I’d never get in there.”

Yet here he is, spending his days this summer painting in Studio 1 at the school, building a new body of work and connecting with other artists.

Figliozzi said Chautauqua’s art program is both more laidback and more serious than his college program. In school, deadlines and coursework were stricter, but there were a mix of students who had found their passion and students who just wanted a degree.

“Here, it’s more relaxed, but everyone wants to be here,” he said.

Figliozzi is taking the time in his studio to paint fun and colorful narrative pieces that celebrate his youth. He said his paintings reflect on his childhood from an adult perspective, displaying the “cheesy, overdone” elements that he was obsessed with as a kid.

He said art addresses areas that other school subjects don’t — fostering creative self-expression, teaching how to learn from mistakes and developing visual and spatial abilities.
“Art is 100 percent essential,” he said.

“Even if I have some other job, I have to always do art,” she said. “I’ll be driving down the road and I’ll stop to take pictures, or make something out of scraps of paper, or sew something onto my clothes.”

She said she’s always felt the need to be creative and that without art, she’s constantly on edge.

“I can’t sleep unless I make something,” she said.