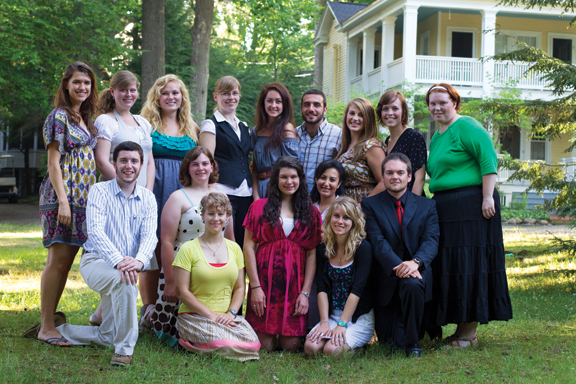 The International Order of the King’s Daughters and Sons class of 2011 hails from the United States, Hungary, Egypt, Lebanon and Canada. Photo by Demetrius Freeman.

Perhaps you’ve seen the houses on the red brick walk replete with huge white banners: “CELEBRATING 93 YEARS: THE INTERNATIONAL ORDER OF THE KING’S DAUGHTERS AND SONS!” and wondered what an international order was or why it necessitates three houses and a chapel on the grounds.

You’re not alone. As a King’s Daughter, I’ve grown accustomed to fielding the questions of curious Chautauquans, from the gently inquisitive, “So what is this thing, anyway?” to, “Is this some kind of cult?”

So to put the rumors to rest once and for all — or until next year, at least — the International Order of the King’s Daughters and Sons is an interdenominational Christian service organization. Its mission is Mark 10:45: “Not to be ministered unto, but to minister.” Its headquarters are in Chautauqua, hence the IOKDS-owned buildings around the grounds.

IOKDS operates hospitals, homes for the elderly, day care and health care facilities for children and libraries around the United States. One of its programs for youth is the “Chautauqua Experience,” in which branches and city unions of IOKDS sponsor young adults to come to Chautauqua for four weeks.

This summer, IOKDS hosted 16 young adults from around the world — including Turkey, Egypt, Hungary, Lebanon and various cities in North America.

Under the guidance of IOKDS Chautauqua Director Valerie Roberts, they have spent four weeks at Chautauqua, taking advantage of all the opportunities it has to offer: taking a variety of classes, going to morning and afternoon lectures, participating in events offered by the Abrahamic Program for Young Adults and living in community with one another.

The majority of the students heard about Chautauqua through a familial connection to the IOKDS program. The father of Sharon Messmore, from East Peoria, Ill., was a scholar himself and later a house parent. The grandmothers of Taylor House, from Cleburne, Texas, and Kenzie Branum, from Fort Worth, Texas, are members of the Order. George and Samuel, the twin brothers of Heba Rezkalla, from Egypt, came to Chautauqua from Cairo last summer as part of the IOKDS scholarship program.

But none of the current scholars had ever been to Chautauqua before this summer.

Julie Steele, from Vienna, W.Va., said the best part of her time at Chautauqua has been enjoying everyone’s company. Samantha Mathis, from Washington, W.Va., chimed in with her favorite part, which was “getting to know people from other countries.”

Erik Jarboe, from Frankfort, Ky., enjoyed the lecture presented by David Gergen, director of the Center for Public Leadership at Harvard Kennedy School.

“I’m a political science major,” he said. “To hear (what I learn in school) coming from somebody besides a professor … was enlightening,” he said, citing Gergen’s faith in the millennial generation.

The scholars have taken a wide range of classes, from sailing to ballroom dance to mosaics. They’ve also volunteered at the flea market, toured Palestine Park and read Scripture for the 9:15 a.m. morning worship services.

Jamie Ringoen, from Boulder, Colo., favored discussions “informally, at night, sitting on couches with everybody,” spurred on by the 2 p.m. Interfaith Lectures and APYA porch chats. This demonstrated the class’ wide variety of perspectives, she said.

“Everybody here … can just sit down and start a conversation,” Katie said.

In Ferez Tawk’s native Lebanon, tensions arise between Protestant and Catholic Christians. Chautauqua is different, and he appreciated the opportunity to attend services at the different denomination houses and participate in interfaith dialogue.

“Diversity is something good here,” Tawk said. “It is a very beautiful thing.”

The IOKDS scholars will say goodbye to Chautauqua — and each other — at the end of Week Four.