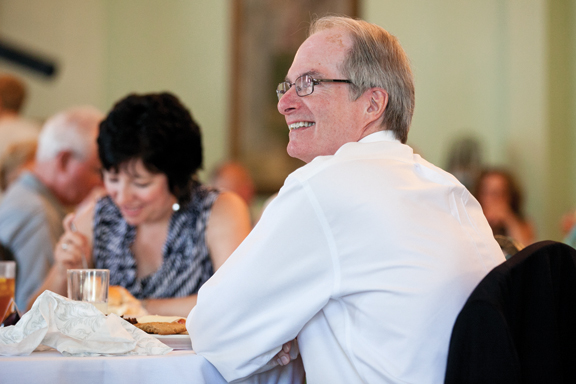 David Williams, director of the Chautauqua Fund, smiles as he listens to Chautauqua Institution President Tom Becker comment on Williams’ accomplishments and his upcoming retirement. Williams has worked for the Chautauqua Foundation since 1991. Photo by Eve Edelheit.

Among the many long sighs and expressions of gratitude the news elicited in the audience, Chautauqua Foundation CEO Geof Follansbee, Chautauqua Institution President Thomas M. Becker and Williams took the podium to recount not only Williams’ success at the Fund but also the importance of carrying on that success. Williams, who came to Chautauqua in 1991, will stay at his post through January 2012.

“His leadership of this program has been extraordinary,” Follansbee said. “Let me tell you how lucky we are. Having been in the development field as long as I have, there are not many directors of annual funds who stay at this work for this length of time and have had the success that David has had.”

Becker echoed Follansbee’s sentiments. Williams was hired when he was working for the Boy Scouts of America, the values of which he truly exemplifies, Becker said.

“We have enjoyed, in this Institution, the experience of people who have stayed in the context of Chautauqua for a long period of time,” Becker said. “That builds familiarity, but it can breed mediocrity, if you think about it. … That’s not the case in David Williams. He is certainly prepared at all times; he is completely honest; he approaches every task with care and detail and concern about the environment in which he’s working and has a positive outlook.”

During his tenure at the Chautauqua Fund, Williams increased the amount the Chautauqua Fund raised annually by an average of 5 percent — a feat that both Follansbee and Becker said is extremely difficult. Follansbee warned the audience that they certainly couldn’t fall below that goal in Williams’ last season.

When Williams approached the front of the room to speak, he emphasized the role the Chautauqua Fund volunteers played in his career and encouraged them to continue their accomplishments.

“I’ve been really lucky,” Williams said. “Tom and Geof mentioned my longevity here in the same capacity. There’s really only one reason for that and it’s you. If I had to just do this by myself day after day, it would get old; it would get boring, and the Fund would get tiring. But working with all of you, all of the time, makes it a different job every single year.”

In light of Williams’ achievements, Follansbee said the Foundation offices had an additional challenge on their hands.

“The major challenge for us in the office is to figure out who is going to eat all the leftover brownies and cookies when David goes,” Follansbee said.