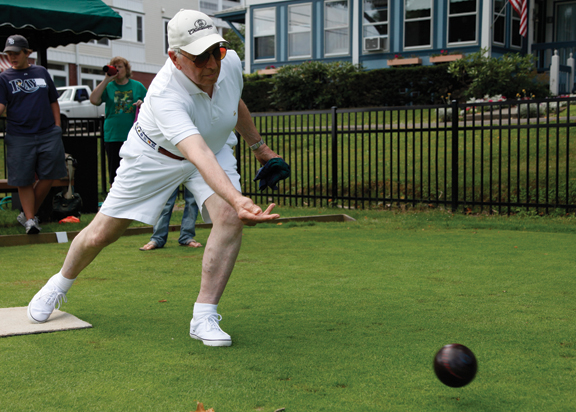 Lawn bowling is just one of many activities served by the Chautauqua Sports Club. Sports Club staff members depend on experienced lawn bowlers to teach newcomers how to play the game. Daily file photo.

Down at the edge of the Institution’s grounds, in the shadow of the grand Athenaeum Hotel, canopied by a few tall trees, sits a quaint little house — Chautauqua Sports Club.

Green shuffleboard courts lie to the left. A few picnic tables with chess and checkerboards on top decorate the front lawn. The lake rests behind the house, with paddleboats, canoes and kayaks bobbing in the water near the dock.

Sports Club director Richard Ulasewicz has lived upstairs in the house with his wife, Peg, for the last 23 years.

Ulasewicz, or “Uke,” as he’s known around Chautauqua, wakes up around 7:30 a.m. every weekday morning and makes a “to-do” list of what needs to be done that day.

Decked out in shorts, sneakers and this year’s yellow Old First Night Run/Walk/Swim T-shirt, Uke does some of the odd jobs that keep the place tidy, including watering the brown patches in the lawn. It’s all part of making the club run smoothly, he said.

On the club’s main floor, couches and armchairs sit in a semicircle around a television for “news and sports only,” as a handwritten sign declares. Next to that is a counter where Uke and his staff sell the annual OFN Run/Walk/Swim T-shirts.

At just after 10 a.m., Sports Club is still. A couple rented some kayaks about an hour ago, so they’ll be returning soon. An older gentleman in a baseball cap comes in to look at Tuesday’s bridge scores, posted on the pale aqua-colored wall.

Outside, a family tosses some plastic balls on ropes across the grass, trying to coil them around a small three-tier rack. The game is ladder golf, or hillbilly golf, depending on who you ask. The club even has its own rules for the game, posted between the bridge scores.

Uke said the hillbilly golf set has proven to be one of the more popular Sports Club activities. Along with shuffleboard, it keeps kids occupied while their parents are off at other Chautauqua events.

“We’re not babysitters here, but we try to entertain,” Uke said, “at least for a little while.”

Staff member Emily Sobilo, 22, from Dunkirk, N.Y., is working her fifth season at the club. From about noon to 4 p.m. on weekdays, Sobilo said, Sports Club is hopping.

“Shuffleboard today?” Sobilo said to a woman who entered the front door wearing sunglasses and a short-sleeved T-shirt. Sobilo recognized the woman, someone she called a “seasoned” player.

“The courts were waxed this morning, so be careful,” Sobilo said to her.

The club’s back room is decorated with life jackets, paddles and even a large fish on the wall above windows that look out over the lake. With the number of boats available, rentals are constant throughout the day at Sports Club.

A young couple comes for an hour-long canoe rental, and Sobilo tells them the rules. They must stay within the buoys, they can go the length of the grounds and they must wear their life jackets at all times. Another worker helps them into their boat.

The staff has its hands full in the afternoons. In addition to the busy boats on the water and the crowded shuffleboard courts, the lawn bowling green livens up around 1 p.m.

Every weekday, a handful of players who’ve paid for season membership meet with new bowlers at the field next to Miller Park to teach them how to play. Sports Club sends down a staff worker to collect a fee, but leaves the instruction to the members, according to worker Kelsey Lanphere, 20, from Hammondsport, N.Y.

Uke sat in an armchair and read the paper for a little while. As he sat, four young girls came in to get shuffleboard cues, and a middle-aged man returned his fishing poles. Uke then commented on Sports Club’s speckled clientele.

“If you noticed how many people came in and out of here in the last 10 minutes,” he said, “it’s not unusual for us to get 200 people a day.”

With a crowd that large, Uke said he likes to keep Sports Club fresh, constantly looking for ways to improve and update what’s available.

“We try to do something new and unique every year here, but it’s hard,” he said.

This year, he updated some of the equipment, purchasing a few new kayaks. These small improvements to Sports Club all add up to maintaining one of the most important recreational sites on the grounds.

At the end of the day — the boats all returned, the shuffleboard courts quiet, the lawn bowling green still — Uke closes up shop. It was just another day at Sports Club, though Uke and his staff will be back in a few short hours. This quaint house on the lake may appear small, but it holds so much possibility. After all, recreation is the fourth pillar here at Chautauqua, and Sports Club is the place to find it.