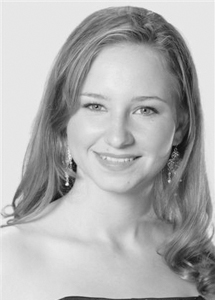 Love, death and the meaning of existence are all themes that will be sung about in this week’s Chautauqua Opera Studio Artists Artsongs recital at 4 p.m. today in the Hall of Christ.

Their selections range in period and style, from the late Romantic, very German Richard Strauss, to the modern sounds of the still-living French composer Isabelle Aboulker.

Rozsnyai said her time at Chautauqua has been very educational. 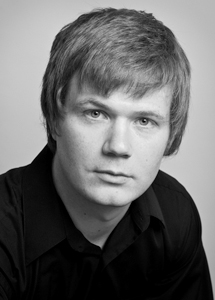 Rozsnyai will be singing six songs: “In a Gondola” and “Pippa’s Song,” both from “Six Songs for High Voice” by 20th century American composer Ned Rorem; “Amor” and “Säusle, Liebe Myrthe,” both from “Brentano Lieder” by Richard Strauss; “Vocalise” by Sergei Rachmaninoff; and “Je T’aime” by Aboulker.

Rozsnyai said she enjoys all these pieces for different reasons.

“I really connect with Rorem,” Rozsnyai said. “(His pieces) sit really high, and it allows me to sing where I’m really comfortable. These are set to the poetry of Robert Browning, which I’ve always loved. They’re beautiful settings of the text. 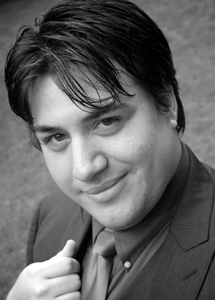 “The Rachmaninoff ‘Vocalise’ is something that I always wanted to sing but never have until now,” Rozsnyai added.

“The Aboulker I actually worked on with the composer, who is still living in France. I really love it; it’s like its own little arietta.”

Later in the season, she will be playing the first Spirit in The Magic Flute and singing in the second of the musical theater revues and the opera scenes program. After she leaves Chautauqua, Rozsnyai will return to the Curtis Institute of Music to finish the last year of her bachelor’s degree.

Rozsnyai said she would like to move to Europe after schooling to begin her opera career there.

For Strommer, Chautauqua’s environment is unique and refreshing.

“The atmosphere of appreciating the arts and learning, especially being part of the opera department, has been a wonderful experience,” he said. “And it’s such a beautiful area, and I can’t get enough of it.”

He said the staff and singers at Chautauqua have made this an enjoyable experience for him thus far.

“I think in the arts, it’s easy to be criticized too much and be down on yourself,” Strommer said. “But here there’s a very positive feeling, and everyone is very supportive and also very professional and educated.”

“They’re very disturbing,” Strommer said of the Brahms pieces. “They’ve always fascinated me, ever since I was a little boy. Now I finally feel like I have the voice to start performing them.

“They ask the big questions about existence and mortality and what happens after. They’re all taken from the Bible. They’ve captivated me for a long time, and I’m really looking forward to performing them.”

He said the two pieces by Duke are particularly relevant this time of year.

“The John Duke I’m singing in part to celebrate American music around Independence Day,” he said.

“They question life and death,” he added. “‘Miniver Cheevy,’ it is said, E.A. Robinson, the lyricist, wrote about himself. The epitome of it lies in the fourth variation, where he says, ‘He mourned romance, now on the town, and art, a vagrant.’”

“It’s talking about how this current society that we live in does not celebrate the arts, and instead we celebrate popular culture, and now art is a vagrant,” Strommer said. “It speaks to me.”

After this summer, Strommer will head back to the Manhattan School of Music for one more year.

“After that, fame and fortune,” Strommer said jokingly.

He said he has several “dream roles” that he would like to play at some point in his life.

“I’d love to sing the heavier baritone roles one day, like Verdi and Puccini, but right now I’d love to do Marcello from ‘La Bohème’ or Belcore from ‘Elixir of Love.’”

Baum said he is enjoying not only the opera program, but the rest of Chautauqua as well.

“I’m having a lovely time here,” Baum said. “The scenery is beautiful, such a wonderful setting.”

Baum will be singing a total of eight songs, four from Robert Schumann’s “Dichterliebe,” and four songs from “I Poemi del Sole” by turn-of-the-century Italian composer Francesco Santoliquido.

Baum called the Schumann “some of the most beautiful music out there.”

“It’s a heartbreaking story,” he said. “The character’s arc ends with him killing himself.

“There are 16 songs in the set, and at the beginning, the character has a sweet remembrance of a lover, and as he goes along, by about song seven, he realizes that she’s really not what he thinks she is, so he’s a little mad.”

Baum said the Santoliquido is more obscure, but shouldn’t be.

“No one knows about him or his work, but they’re really gorgeous songs,” Baum said. “It will be a wonderful opportunity for people to hear something new that they don’t usually hear.”

These songs by Santoliquido also have a connection, at least ostensibly, to Chautauqua, Baum said.

“They’re set in the village of Anacapri, Italy, which is a quaint resort area off the coast of Italy,” he said. “It’s very similar to here. There’s a song about all the little white houses, and there’s a song about the reflections of light off the water.

“It seemed so appropriate.”

Baum started singing in college. He began his undergraduate studies as a violin performance major, having never before sung seriously. He auditioned for choir, and the teacher recruited him to switch majors and join the voice program.

“Things worked out, and I’ve just fallen in love with it — especially the opera side of things,” Baum said.

In addition to the three solo sets, the singers will close the recital singing a trio from “La Fille du Régiment” by Gaetano Donizetti.

Baum said this is a perfect closer.

“It’s great way to end the recital,” Baum said. “‘To me, it feels like a refreshing glass of lemonade.”