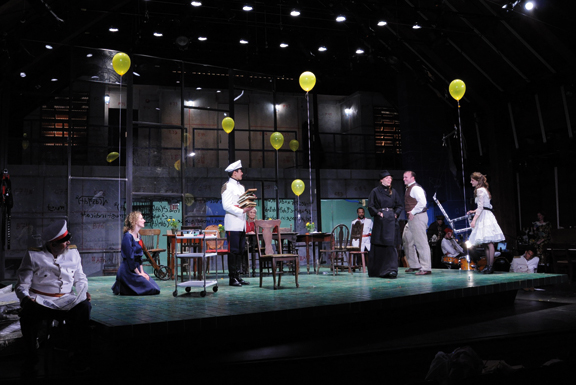 Chautauqua Theater Company begins the first of 15 performances of its production of Anton Chekhov’s “Three Sisters” with a preview of the play at 8 p.m. tonight in Bratton Theater.

The company’s preview performance is open to the public and allows the guest director to see the show with an audience before he leaves Chautauqua.

The play, which features nine conservatory members and five professional guest artists, is guest directed by Brian Mertes and is a more expressionistic take on Chekhov’s traditional Russian play.

Written in four acts, “Three Sisters” was first performed in 1901 and is regarded by many critics as one of the finest dramas of the 20th century. Set in a provincial garrison town in Russia, the play tells the story of the Prozorov sisters — Ólga, Másha and Irína — who, along with their brother, Andréy, spend their days yearning to return to the privileged life of their former home in Moscow. The sisters’ only relief is found in male companionship.

Benesch said that while the production of “Three Sisters” may differ from traditional interpretations of the Chekhov play, Chautauqua audiences are in for a thrilling theater experience.

“It is everything that Chekhov is supposed to be,” Benesch said. “Vital, heart-wrenching, leaping both into the abyss and onto fluffy pillows all at once.”

“This is yet another addition to the entire theatrical conversation that we’re able to have with the Chautauqua audience,” he said. “I think starting off with ‘Three Sisters’ is a big boom.”

Borba said he is excited for tonight’s production, as it represents all the hard work put in by company members over the past two months.

“It’s as if you’ve been training for a sporting event, and then the event actually happens,” Borba said. “There’s a big difference between spending all day jogging just to get into shape and actually having it happen.”

“The most exciting moment is when everything you’ve been working on meets the audience,” Chelimsky said. “There is real wonder, to me, in that moment when all of a sudden you have the opportunity to bring a community together for a shared common experience and see what happens there. What transpires at the moment that you hit the audience changes everything, and that’s a remarkable thing.”

After the work put in by company members in getting the production polished and ready, Chelimsky said they are ready for audiences to come and enjoy the production tonight.

“The tickets are sold. The people are coming,” Chelimsky said. “We are going to be ready to open the doors and have a sight for the audience to behold when they walk in the doors the first time.”