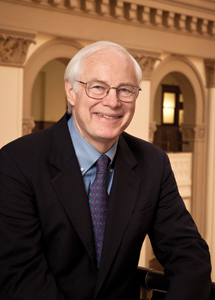 Adding further depth to this week’s theme of “Government and the Search for the Common Good,” Jim Leach, chairman of the National Endowment for the Humanities, will be holding two additional sessions this week to augment his 10:45 a.m. Monday lecture.

At 3:30 p.m. today in the Athenaeum Hotel Parlor, Leach will lead a Town Hall-style meeting, opening up the discussion of the topic at hand for a more advanced dialogue with Chautauquans.

“I think Chautauqua, first of all, is a center of a dialogue movement that symbolizes the best in American conversation,” Leach said.

Leach said he is looking forward to an avid discussion about government and responsibility. His current position as the head of a federal agency invested in an aspect of the common good — the humanities — and his past government service as a congressman lend some personal experience to his discussion.

Today’s Town Hall is representative of one of Leach’s major focuses, involving citizens in conversation about the government and civic responsibility.

“We’re in a country that has always been one in which citizens are considered to be the center of vitality of governance,” Leach said. “One of the great challenges is for all of us as citizens to insist that the government be accountable to us. That is a challenge at all times to American life and that we are all responsible and accountable for, and I think Chautauqua is a great place to bring that out.”

Leach hopes his Town Hall meeting will ignite the conversations necessary for inspiring action and responsibility but also provide him with new insight.

“What I have found around the country is that thoughtful citizens are loaded with not only questions, but observations that often are far more profound than anything I have suggested, and the Town Hall format is one in which the audience is likely to learn more from their colleagues than they will from me. I look at this as a great learning experience, and I have always enjoyed interactive events more than  the set up of a speaker lecturing,” Leach said.

At 12:15 p.m. Wednesday in Smith Wilkes Hall, Leach will open up this conversation further at an Elected Officials Panel. Leach will moderate questions and discussions among the panelists, who include William Clinger, a former congressman from Pennsylvania, and Amo Houghton, Stan Lundine, Jack Quinn and Thomas Reynolds, all former congressmen from New York. Clinger and Lundine are Chautauqua residents and have served on the Institution’s board of trustees.

“The panel is going to be fabulous,” Leach said. “I think you’re going to get a lot of commentary about how things work as well as what the issues are. We’ve got issues of war and peace, spending and taxation, just simply the ability of the government to make decisions. This particular group of panelists should be very enlightening, and I look forward to hearing their perspectives.”

Adding a call to action as a secondary function of the government panel, Leach said he hopes Chautauquans will come away from the event with an expanded view of American government and its functions and, most importantly, the impact of citizens.

“We’ll be trying to provide a perspective of American history on challenges of the time, which are extremely unique, and of a degree of importance that cannot be underestimated in where America is in the world today,” Leach said. “That is, we are facing challenges of a different nature than we ever envisioned as a country. In looking at these challenges, we’re going to have to adapt in new and profound ways.”