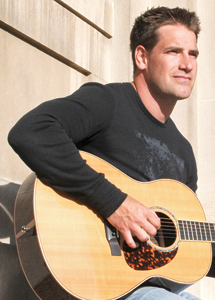 Jackson Rohm, a Jamestown, N.Y., native, returns to the College Club for a free evening of acoustic country, rock and pop at 9 p.m. tonight.

Rohm visited Chautauqua many times in his youth. Now, he tours across the eastern states with his music but returns to Chautauqua County every summer. Rohm has been entertaining audiences at the College Club for more than ten years.

“I always enjoy playing the College Club,” he said. “It’s nice to have a Tuesday where people seem to come out pretty much in force.”

Playing there also brings back memories for Rohm. There are always familiar faces in the crowd, and sometimes, fans who are no longer college-aged come back to see Rohm play.

Rohm’s live show sets are a blend of original songs and covers spanning many decades and genres, including songs from Cat Stevens, James Taylor and newer bands like Mumford and Sons.

His sixth and latest album, “Acoustic Sessions,” contains 14 original tracks and was produced with an MTV Unplugged sound in mind. Its nine re-releases and five new songs were recorded with acoustic instruments like guitar, upright bass, piano and mandolin. Songs from “Acoustic Sessions” can be heard locally on KISS-FM and on My Country 101.9.

“It was fun to do,” he said. “The record was pretty well received, because I think the people who knew the songs were anxious to hear a different rendition of them.”

He has more than 20 years of experience as a professional musician but remains unsigned by choice.

“I love the lifestyle of traveling and performing as a musician, but I don’t love people telling me what to do,” Rohm said. “I don’t have to worry about anyone else. It’s all on me — I prefer it that way.”

Rohm is writing new music for his seventh album, which is to be recorded in November. He will continue to play shows around northwestern New York, northern Ohio and in Chicago this summer.

“Musically, my focus is on writing right now, but performing the shows, that’s the fun part,” he said. “I have a full schedule of places where I want to play.”

The College Club is open to ages 17 and up. Admission is free and requires a gate pass and photo I.D. A selection of Rohm’s CDs will be sold at the concert.