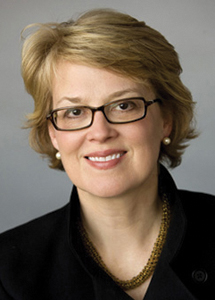 The Rev. Katharine Henderson is a “troublemaker” in ministry. She is the president of the Auburn Theological Seminary and teaches students to become Christian leaders.

“The idea is that leaders and people of faith are called to help to create a just and more peaceful world, and sometimes that means not maintaining the status quo but stirring things up to create transformation and change,” Henderson said.

At 2 p.m. today in the Hall of Philosophy, Henderson will present her lecture “Trouble the Waters, Heal the World,” for the Interfaith Lecture Series. The title of the lecture, which is also Auburn’s tagline, is a combination of the African-American spiritual “Wade in the Water,” lines from Isaiah 58 and the leadership qualities that Auburn and Henderson share.

“My identity as a religious leader … is entirely aligned with the work of Auburn. We have a vision … that we’re going to need to do that work of bridging the religious divide, building communities, pursuing justice and healing the world,” Henderson said, adding that Auburn leaders are taught to be spiritually grounded, able to pursue justice, entrepreneurial and media savvy. “Because we think that this is what religious leadership for the 21st century looks like.”

Henderson said her desire to be a Christian troublemaker stemmed from her past. Her mother was the first woman elder in her church and her father was a professor of theology. Henderson often participated in civil rights marches with her parents. But one of the most testing times in her life was while she was an atheist.

Because she grew up as a pastor’s daughter and called herself a “cradle Presbyterian,” Henderson said that she experienced the same period of atheism that many preachers’ children do.

“That led me for a period of time to a very important and profound atheist period in late high school and college … and a very important reconnection to God and to the church through the words of the Catholic priest at the monastery in Germany when I was in college, who welcomed me to take Communion even though I was not Catholic,” Henderson said. “He really was the agent of God that brought me back to the church. What I realized was that God had been available and present all along, and
I had been the one putting up obstacles and distance.”

There are also troublemaker roots in Biblical and American history, Henderson said, like the civil rights movement in which she grew up.

“There’s a Biblical history that we can look at all the way back to the prophets and Jesus himself, who called us to do the work of justice, to be repairers of the breach and restorers of the streets to live in,” she said.

In addition to addressing religion and social inequality, Henderson will talk about some of her role models, like Dietrich Bonhoeffer, a Lutheran pastor during World War II who participated in the resistance movement against Hitler and was killed for doing so.

“I’m going to be talking about the new great awakening that’s happening, where people of faith are going to be engaged in a multi-generational, multi-faith movement addressing issues of justice to heal and repair the world,” Henderson said. “So I think we’re on the cusp of a new era, and I’m looking forward to engaging the people at Chautauqua in thinking about being a part of this movement with us.”