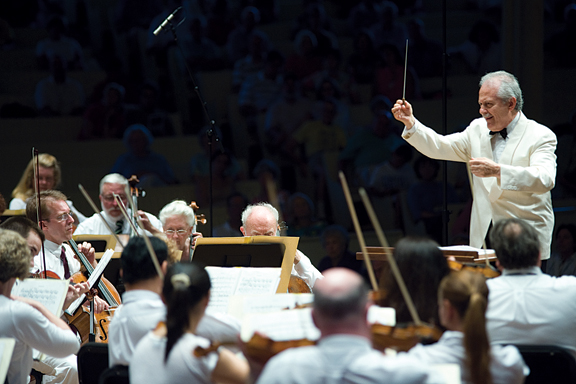 Guest conductor Jorge Mester leads the Chautauqua Symphony Orchestra through its first concert of the 2011 Season Saturday evening in the Amphitheater. Photo by Ellie Haugsby.

When guest conductor Jorge Mester mounted the stage of the Amphitheater for Saturday’s season-opening concert, he immediately turned away from the orchestra to conduct the audience in a sing-along of “The Star Spangled Banner.” Smiling broadly and snapping his stick, Mester radiated purposeful delight.

Enterprise and enjoyment were the themes of a program that seemed designed to please and delivered on the promise, from the feather-light woodwind chatter of Ernst von Dohnányi’s “Symphonic Minutes” that opened the concert to the crashing stretto of Tchaikovsky’s Symphony No. 4 at its end.

The Dohnányi suite was a charmer: five short character pieces draped in glittering late-Romantic orchestration — think of Hindemith’s “Symphonic Metamorphosis on Themes of Carl Maria von Weber,” but without the last measure of juiciness in that work’s melodies (thank you, CM!).

This music must have been as new to the players as it was to the audience, but the CSO played it very credibly. Mester’s Louisville Orchestra has recorded 72 world premieres; he clearly knows how to prepare.

The Tchaikovsky Fourth Symphony poses a different challenge, finding something fresh to say in such familiar music. That may be beyond the power of any conductor at this point, but Mester led a snappy performance that emphasized the organization of sound. There was a real snap and bite to the unison exclamation point at the end of the opening movement’s “fate” motto, and there was a physical force to the sound, too.

Mester built the sonority from the bottom up, as one must do in Russian music. Low brass and strings had a solid, monumental quality and timpanist Stuart Chafetz hammered out his implacable rhythms with verve. He looked as though he were having the time of his life. The MVP Section Award of the evening goes to the CSO winds. The nicely wheezy Russian bayan accordion sound in the trio of the brilliant pizzicato Scherzo was surely what Tchaikovsky intended.

But the evening was not all froth. Violinist Karen Gomyo brought great concentration and seriousness of purpose to Samuel Barber’s “Violin Concerto.” This is music filled with the outsized yearnings and dreams of youth, and Gomyo was very free with her rubato. She formed the arcing, longing melodies of the opening movement into discrete paragraphs, pausing at the end as if to reflect on what was just said. Mester and the CSO were sympathetic to the point of deference.

If the first movement was rhapsodic, the Andante was restrained, nine minutes of very affecting peace before the whirlwind finale. It was a hot night in the Amp, and Gomyo was clearly contending with the humidity, but by the time she came to the end of the punishing sixteenth-note triplets that conclude the piece, she had the crowd on their feet. It was that kind of night.