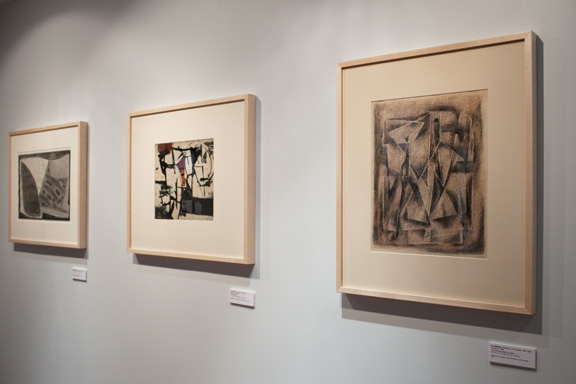 The exhibition “Abstraction in America: 1940s to 1960s” at Strohl Art Center runs through Aug. 22. Photo by Eve Edelheit.

‘New expressions of the spirit’

Such the wonder of a new way of being in the world: the proposals that remake our visions, rare celebrations like the turn toward abstraction in art during the last century.

Humankind at its best suggests new worldviews — that our ground is round instead of flat, for instance, and it is a shared amazement, like the suggestion that a star is at the center of things rather than us. And with these understandings, we are transformed.

How extraordinary to divine that just a line, or a smudge of color, or a brilliance or intensity might be worthy of an idea, or emotion or new expressions of the spirit: such the boldness of visual alternatives after centuries of orientation to the figure, to the horizon or to the landscapes.

Treasuries of these visual ideas are found in museums around the world, keepers of culture, and few are more articulate in their assemblies than the Albright-Knox Art Gallery in Buffalo, N.Y., one of the first public museums in America.

The Albright-Knox and Visual Arts at Chautauqua Institution collaborate this summer with an exhibition of just rightly scaled smaller works from that intellectual and cultural explosion of the mid-20th century, the period of “Abstraction in America: 1940s to 1960s.”

In the second floor Gallo Family Gallery in the Strohl Art Center on Wythe Avenue, a showing of 16 paintings and drawings by as many artists paints the emergence of a mindset that changed the world.

This cognitive revolution began sensibly in liberties with the known, including a free-wheeling American representation of our wilderness landscape, centered here with a great watercolor by Milton Avery, “The Brook” from 1943, made up by shorthanded inferences of the fracture of light as water crosses rocks, and a slashing suggestion of pines and brook’s banks, filled with the vitality of nature.

It is not a long aesthetic reach, then, to the bold assertions by Franz Kline, who rendered a fractured grid that held together an almost square piece of paper — in this show that broken grid and an anchoring black rectangle with a swatch of dark red here and over there and a quickly rendered sphere in the upper right, aptly “Untitled,” from 1946–48. This little oil painting has nothing to do with landscape, but it has a lot to do with how one can organize a space with enough wiggle room to encourage a viewer to continue the conversation.

And so it goes, the dyke of expression then broken open for abstraction. Paul Jenkins rushed in with big blacks and Mark Tobey with smaller, delicate, contemplative gestures to fill their frames. Sam Francis let the wet watercolor run down the paper, just as he did in his paintings, and Alfred Jensen looked around to a Mayan tradition to remark on time in a different way.

These are open-door invitations offered through the exhibition to see how great minds work, making hypotheses for vision the way a writer might propose a tumble of words for a poem, or a scientist ask, “what if?” matter performed sub-atomically.

The paintings in the Strohl show are not the paintings that usually demand attention in the big halls of museums. Here are the drawings, or prints that museums usually hold back in the vaults for scholarly inquiry. But so many artists themselves proclaim that these are the more interesting evidence of accomplishment — more revealing than the mountaintop amplifications that qualify in the popular mind as masterpieces. Here, with these drawings and smaller works, is the excitement of the studio — or the laboratory — rather than the products of these labors that are later commodified.

The giants of the field are assembled in this showing — Jasper Johns with just such an experiment, called “False Start II,” which is all about process; and Hans Hofmann, Cy Twombly, Adolph Gottlieb, Lee Krasner and Philip Guston, the latter with a glorious ink sketching of falling-down black lines and the ample space between, dedicated to his good friend, the composer Morton Feldman, for whom notes were a falling-down sprinkle that paid a lot of attention to the silences between.

These are the artists, too, who were the good friends of the Albright-Knox, many of them enjoying important exhibitions there, so that their careers were integrally wound around the museum’s own culture. The exhibition was a collaboration between VACI Artistic Director Don Kimes and Ilana Chlebowski, a curatorial assistant at the Albright-Knox. Chautauquan Leslie Zemsky, president of the Albright-Knox board, worked to bring the collaboration to fruition. The show continues through the season, to Aug. 22.

Another exhibition across Wythe in the first-floor gallery of Fowler-Kellogg Art Center focuses through the first decade of the 21st century on the print, often abstract, and usually in the wake of abstraction when not.

Charlie Hewitt’s big woodcuts command each wall with his clumpy, aggressive massing in vivid colors, grounded usually in powerful orange and yellow. Hewitt is a descendent of the rough and tumble of Abstract Expressionism, but scrubbed up for the party, sporting a cleaner edge and surface.

Karla Hackenmiller’s etchings and monoprints play a different tune. She calls them “Liminal,” meaning at the edge of sensation, barely perceptible, and indeed, her complex biomorphic shapes are a microscopist’s delight, like a look through the ocular at a sample of pond water.

Bernar Venet has an even more quiet song, simplified to several strong lines inked assertively, and how wonderful it can be, in fact, to agree with pleasure and surprise in the reward hidden in his work and revealed in his titles, “Random Combination of Indeterminate Lines.”

The exhibition, called “The Contemporary Printmaker,” is a showing of varied pleasures — technical mastery of mezzotint (and mood) by Art Werger; amazing aquatint etching of complex stilled life constructions by Katja Oxman, and then the simple rendition of the face by Alex Katz, with delightful liberties in mapping and location by Paula Scher, and the clean grace of line and hue by Tom Raneses, who also installed the complex show. It continues through July 21.

Anthony Bannon is the Ron and Donna Fielding Director of George Eastman House, the International Museum of Photography and Film in Rochester, N.Y.