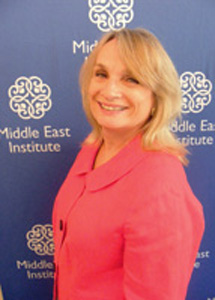 This article originally appeared on Page 1 of the Wednesday, July 1, issue of The Chautauquan Daily

“She was there for many of the most important firsts: the first moments of startled clarity, the first phone calls from Washington to Islamabad, the first high-level meetings. On Thursday morning, Sept. 13, she brought the list of eighteen key military demands to President Pervez Musharraf and sat stiffly in his office for forty minutes until he answered the question she’d carried from the president: ‘Are you with us in this fight?’ When he said, ‘I am, without conditions,’ she got up and left.”

Ron Suskind’s book, The Way of the World, describes a woman who was the U.S. ambassador to Pakistan during the 9/11 attacks. Today, that woman will speak to Chautauqua about global development in the context of the U.S. relationship with Pakistan.

, president of the Middle East Institute and former U.S. ambassador to Laos and Pakistan, will present “U.S. Aid to Pakistan: Harmful or Helpful?” at 10:45 a.m. today in the Amphitheater.

Chamberlin has held various jobs that have shaped her positions on development and foreign policy.

“I had first been to Laos as a teacher during the war, a volunteer with the peace corps,” Chamberlin said. “I returned 20 years later as ambassador, and it was an interesting period for me to see how Laos had developed and not developed.”

“I was immediately thrown into the whole mix,” Chamberlin said. “At my first meeting with President Musharraf, I had to deliver the whole ‘are you with us or are you against us’ and had to persuade him to change his policies and support our counter-terrorism. I think we did establish a good relationship with the Pakistani government; we reinvigorated the relationship very quickly.”

After her time as an ambassador, Chamberlin worked with the Bureau for Asia and the Near East Bureau in the U.S. Agency for International Development for two years, according to the Middle East Institute website.

“Since (1961), USAID has been the principal U.S. agency to extend assistance to countries recovering from disaster, trying to escape poverty and engaging in democratic reforms,” the USAID website states.

Chamberlin was also the deputy high commissioner for the United Nations High Commissioner for Refugees from 2004 to 2006, an agency that works to protect the safety and rights of refugees worldwide.

In 2007, Chamberlin became president of the Middle East Institute, the position she currently holds.

The Middle East Institute has operated for 64 years with the goal of educating people about Pakistan. The organization teaches languages, has an internship program and sponsors lectures, panels and conferences, Chamberlin said.

Several days after President Barack Obama announced Osama bin Laden had been killed, Chamberlin was interviewed on the “PBS  NewsHour” about the U.S. relationship with Pakistan and about the problems that would be caused if the U.S. were to cut back on civilian developmental aid.

“(Cutting back on aid) would just feed the anti-American narrative that is out there that goes something like: We use Pakistan; as soon as we get what we want, we leave them. We abandon them,” she said during the show. “Let’s understand what civilian aid can do and what it cannot do. It cannot buy us hearts and minds in a nation as complicated and as large as Pakistan. You don’t buy friends. It’s not transactional.”

Chamberlin’s lecture today will focus on her time in Pakistan and the U.S.-Pakistan relationship.

“What I’m going to do is to put our whole relationship in context,” Chamberlin said. “Our U.S. aid throughout the history of Pakistan has been an integral part of the way Pakistan has developed.”

The last lecturer in this week’s Global Health and Development as Foreign Policy series, Chamberlin will seek to put development into context through her experience in Pakistan.

“To understand our development assistance, you have to understand the culture, policy and history of Pakistan,” she said. “I’ll be talking about the entire narrative, the Pakistan relationship.”