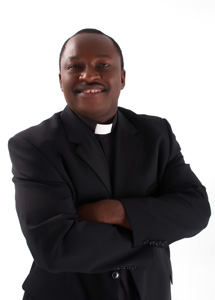 This article originally appeared on Page 1 of the Wednesday, June 30, issue of The Chautauquan Daily

The summer’s theme for the Chautauqua Literary and Scientific Circle is challenge, and for the war-torn African children of Say You’re One of Them, the season’s first selection, their greatest challenge is survival.

Uwem Akpan’s short stories detail the children caught in the crossfire, both their tragedy and their strength. The author will speak at the CL

SC Roundtable at 3:30 p.m. today in the Hall of Philosophy.

Say You’re One of Them, the first book by the African priest, is a collection of five short stories. They are all told from the perspective of African children born into some of the worst modern-day crises, from human trafficking to poverty to genocide.

The book was chosen for the Oprah Winfrey Book Club in 2009 and won the 2009 Hurston/Wright Legacy Award, the Commonwealth Writers’ Prize for Best First Book and the PEN/Beyond Margins Award. The book’s many voices cut across the continent and its religious and ethnic divides. For Akpan, this language of children is universal.

“From the perspective from which children could feel things … I was just curious, what did he think of these crises?” Akpan said.

“It’s like, watching after (the hurricane in) New Orleans, we see what the TV covers from what the adults are showing. But we see these children walking around. What is going on in their heads?”

Born in 1971, under a palm wine tree in Southern Nigeria, Akpan’s childhood was worlds away from the tragic conditions of his characters. Nigeria — a British colony until 1960 — had just ended its three-year civil war, and his village of Ikot Akpan Eda was a place of peace.

“The children were all around; it was a typical village where everybody knows everybody,” Akpan said. “What I remember was that there were a lot of celebrations, both Christian and traditional celebrations; that’s what I remember.”

Akpan and his three brothers spoke both English and Annang, one of the more than 3,000 languages of Africa. Annang has a rich oral history, and Akpan’s mother raised the boys on legends and folktales. Yet his parents were also teachers, and they inspired his education. Akpan traveled to the United States to study philosophy and English at Creighton and Gonzaga universities before entering the Catholic University of Eastern Africa to study theology.

He was ordained a priest in 2003, and in seminary school, he took up writing in between his studies, eventually receiving a master’s degree in creative writing at the University of Michigan in 2006. His first story published in the United States is “An Ex-Mas Feast,” which appeared in a 2005 issue of The New Yorker.

It is a brutal tale of one of the many street families of Nairobi, Kenya, of a daughter forced to turn to prostitution, of children who sniff glue to ease their hunger. It is also the first story of Say You’re One of Them and a stunning example of Akpan’s colorful dialogue and storytelling — a result of intense research.

“If I set my story in Rwanda, I try to bring in the Rwandan, the language of Rwanda. The thing is that people who speak the language I’ve written about, if you make a big mistake, they will call you out,” Akpan said. “For them it’s like, you’ve come to their part of the world, you’re telling this sad story; why can’t you try to get it right? For me it was a very sensitive thing, trying to get this right.”

The retelling of tragedy is certainly a sensitive process. One incurs the risk of seeming sensational, morose or pessimistic. Yet the subject matter is a fact of life, Akpan said, from Africa to Asia to the U.S.

The name of the book Say You’re One of Them is in part a reference to how some in Africa are forced to hide their identities to protect their lives. This is the main conflict of the story, “Luxurious Hearses,” in which a Muslim boy named Jubril tries to evade detection on a busload of Christians fleeing Islamic riots in Northern Nigeria. Jabril, who adopts his Christian name Gabriel and wears a Marian medal around his neck, must keep the stump of his right arm hidden from view in his pocket — amputated for theft under Sharia law.

But the name Say You’re One of Them is also about belonging, inside a family or tribe or nation, or being left out.

“What I’m saying is, wherever you go in the world, people are the same. Some people feel they are part of the love circle, others feel they are out,” Akpan said. “So it comes to, are you one of them? Say you’re one of them, how would you feel?”

The story “Luxurious Hearses” is particulary poignant because it takes place in Akpan’s home country. Yet he chose to write from the voice of a Muslim youth, despite his identity as a priest. The attitude of religious acceptance and respect is a mark of hope throughout the book and its tales of grisly tragedy, along with the resilience of children and their faith.

“I want people to come to know and understand and feel empowered that they can do something,” Akpan said. “I try to write about these things. They are hopeful, just like children all over the world. The vastness, the hopes and dreams of these children, they will carry us forward.”