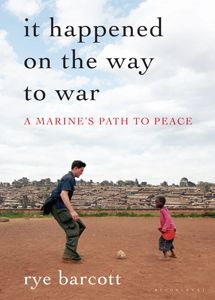 This article originally appeared on Page 3 of the Tuesday, June 28, issue of The Chautauquan Daily

Rye Barcott will discuss his book It Happened on the Way to War at 4 p.m. today in the Hall of Philosophy.

It Happened on the Way to War is an account of Barcott’s experiences living in the Kenyan slum of Kibera. Barcott initially visited Kibera as a 20-year-old student from the University of North Carolina on his way to serve in the U.S. Marine Corps.

While serving in Iraq and Bosnia, Barcott founded Carolina for Kibera, a non-profit organization, along with Tabitha Atieno Festo, a local Kibera nurse, and Salim Mohamed, a community organizer.

As part of Week One’s theme of Global Health and Development as Foreign Policy, Barcott’s work as both an author and advocate highlights the struggles of the Kibera community on both a local and global scale.

Carolina for Kibera focuses extensively on the health problems of the Kibera community, 10 to 25 percent of which is infected with HIV and AIDS. In response to this particular issue, Carolina for Kibera created a community-based clinic that serves more than 40,000 patients a year.

Barcott and his organization are relevant to this week’s theme because of the focus on health but also in the way they operate. Committed to inspiring change from within the community, Carolina for Kibera’s Kenyan office is staffed only by locals. The organization focuses not only on health but also social and economic issues, using a three-pronged approach to alleviate Kibera’s hardships.

After returning from his military service, Barcott was a Reynolds Social Entrepreneurship Fellow at Harvard University, from which he received master’s degrees in business and public administration. He currently works for Duke Energy and serves on Carolina for Kibera’s board of directors.