Despite their differences, religion and maternal mortality go hand in hand.

“We can’t address health issues without dealing with faith communities, and in many of these communities, the most important leaders are faith leaders,” said Ambassador 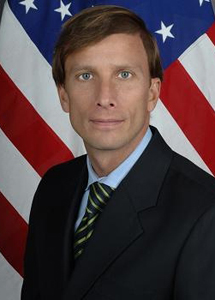 , the co-director of the O’Neill Institute for National and Global Health law at Georgetown University and the Interfaith Lecture Series’ first guest lecturer.

Chautauqua’s Department of Religion collaborated with the Global Health Council to present “Toward a Healthy World: Maternal and Child Wellbeing,” the first week of Interfaith lectures. Dybul will present “Faith and Global Health: Opportunities and Challenges to Create a More Perfect World” today at 2 p.m. in the Hall of Philosophy. Jeff Sturchio, the president and CEO of the Global Health Council, will introduce Dybul.

The Global Health Council works to ensure that programs are in place to improve maternal and child health around the world, an aspect that is key on the global health agenda, Sturchio said.

Approximately 1,000 women die each day in developing countries because of complications during childbirth, and most of these deaths are easily preventable, Sturchio added.

Faith-based organizations, from hospitals to churches, provide the majority of health services to Africans. The benefit is that when faith leaders change their perceptions of maternal health, the members of their communities will often follow.

“I’ll discuss how we got to where we are, but also … how we could do things differently and how engaging the faith community could help,” Dybul said, adding that there are several challenges to addressing this issue from a religious angle.

For example, the most effective ways to avoid maternal death involve voluntary family planning, like access to birth control. HIV is another major cause of maternal and child death, particularly when there is mother-to-child transmission, Dybul said.

Religious beliefs and preconceived notions about HIV pose a cultural challenge. Many polygamous churches in Africa, for example, teach that HIV is a curse from God. But religion itself is not the source of the problem.

“There’s not really a conflict between religion and (maternal) health. It’s really a question of understanding how people in local cultures view these issues,” Sturchio said. “All of these issues are addressed by starting from the point of view of understanding that one needs to work within local cultures and not try to impose other choices on them.”

When Dybul visited Africa, his passion for studying HIV at an international level was born. Instead of pursuing a doctorate in English, he enrolled in medical school and began a career in global health that would lead him to become former President George W. Bush’s U.S. Global AIDS Coordinator in 2006.

Under this administration, Dybul helped implement the President’s Emergency Plan for AIDS Relief, a government initiative to combat HIV and AIDS on a global scale. He also led Bush’s International Prevention of Mother and Child HIV Initiative and was involved in writing guidelines for the Department of Health and Human Services regarding adult and adolescent HIV therapy.

Although his travel fueled his studies, Dybul’s faith also shaped his passion and career goals from an early age.

“I was brought up in the Catholic and Jesuit tradition and from the earliest days, we were taught that we were put on this earth to serve,” Dybul said. “So that’s been a fundamental part of my life and that’s the animating force behind what I
try to do.”